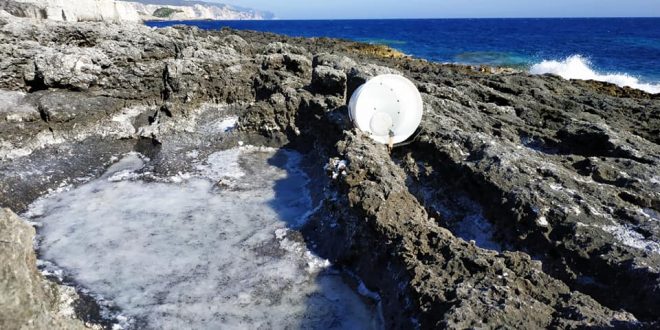 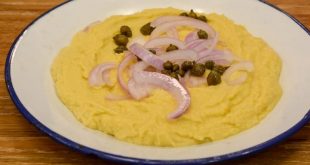 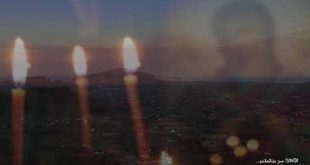 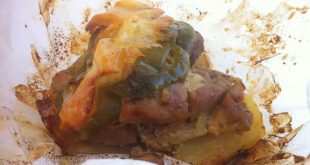 Sea salt or Afrala as it is known in Zakynthos. It is a crystalline form, which is found in abundance in nature and is the main component of seawater.  We also find it as a mineral, the well-known cooking salt, or sodium chloride, or rock salt.

Used for a long time, both in the process of preserving  products and by-products of hunting and slaughterhouses, fish, as well as agricultural products, and for the taste improvement of food, it contributed greatly to the development of the human race. .

It is used in cooking as a flavouring, as mentioned, but also in the chemical industry, as an element in the creation of chemical compounds. 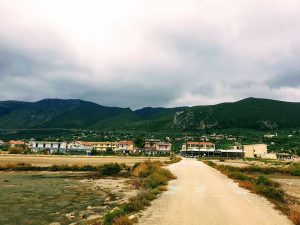 In our particular homeland, with the method of evaporation of seawater, salt was produced in the area, where the Municipality of Alykes used to be, in an area of ​​about 300 acres, where the characteristic salt lakes  were.

Sea salt comes from a natural source and contains other minerals, including:

Table salt does not have these additional nutrients, but it does contain iodine if fortified.

Health organisations recommend consuming less than 1,500 mg daily.  Even for people who don’t have high blood pressure, less sodium will significantly blunt the rise in blood pressure that occurs as we age and will also reduce the risk developing other conditions, such as kidney disease, associated with eating too much sodium.

Contrary to popular belief, sea salt is extremely beneficial in keeping us hydrated. The amount of nutrients in sea salt also satisfies our thirst for a longer period of time and keeps us holding on to the fluids for longer.

Table salt, on the other hand, dehydrates us and actually leeches essential minerals from the body. It also makes us crave it more (I used to be a salt addict!) because our bodies is in need of nutrients that it wants in natural sea salt that cannot be satisfied by processed table salt.

Some people think that salty food makes you bloat or retain water, and yes, this happens when you consume white table salt and refined salt used in processed foods. I remember the days I would wake up feeling groggy and bloated after a late night pizza binge with friends.

However, with real sea salt, the opposite happens because of its balanced ratio of minerals, especially potassium and sodium, which help release retained water. Eating real food and salting your own food with sea salt will help eliminate bloat and water retention.

Did you know that high-quality sea salt has 84 trace minerals that nourish and strengthen our body? We used to be able to get enough minerals from the food we eat. However, with monocropping and improper farming methods, our soil has been depleted of these essential minerals and doesn’t provide the nutrients to our food like it used to.

However, we can supplement with sea salt and replenish our bodies with these easily absorbable minerals. I even put a pinch of sea salt in my water each day for that extra nutrient profile!

Because of its amazing mineral content, sea salt is a great source of electrolytes like magnesium, calcium, potassium, and sodium. These electrolytes are vital for muscle, brain and heart health, because of its critical role in the nervous system. Instead of the typical sugar-filled electrolyte drinks you can find at the supermarket, try adding sea salt to water with a squeeze of lemon juice.

When your electrolytes are low, you can experience muscle soreness, cramps, charley horse, and even restless leg syndrome. The lack of minerals keeps the muscles from relaxing and cause contractions that are out of your control. This is why epsom salt baths are recommended for any kind for muscle fatigue. The magnesium in epsom salt plays a huge role in loosening and calming the muscles and your entire body.

If you know you’ll be doing a strenuous activity, make sure to add sea salt to your water before and after to replenish your body with the minerals that it loses during the exercise.

Because of its potent mineral content, sea salt has anti-inflammatory properties that are beneficial for skin health. There are many beauty products that use sea salt, because it has the power to detoxify the skin, while exfoliating, increasing circulation, and providing the skin with nutrients. Sea salt has been shown to be especially beneficial for acne, psoriasis, eczema, and anti-aging.

Sea salt is necessary in the role of digestion, and it starts in the mouth. The salivary amylase, an enzyme which helps break down carbohydrates in the saliva, is activated by the flavor of salt.

Also, salt plays a huge role in the making of hydrochloric acid, which is secreted in the stomach for the breakdown of food, especially protein. Most people are insufficient in hydrochloric acid, and this can cause numerous digestive issues like bloating, gas, heartburn, indigestion, and can eventually lead to leaky gut and chronic disease.

Adrenal fatigue of varying degrees is extremely common today, resulting from stress and poor diet. With adrenal insufficiency, one of the main symptoms is salt cravings. This is because the body is craving the nutrients it needs from sea salt.

Among their numerous demanding functions, our adrenal glands release hormones that regulate sodium and potassium in the body. So in order to make this particular job easier, the adrenals need a balance of these minerals through high quality sea salt. This is especially important when they are already tired from the stress we put through them everyday.

Yes, high quality sea salt is greatly beneficial for regulating blood pressure. The rise in blood pressure is the result of inflammation in the body, which is primarily caused by a high sugar, processed food diet, which also includes white table salt that’s devoid of most nutrients.

Real sea salt actually reduces inflammation by bringing in the necessary minerals that the body uses to boost its immunity. By providing the body with enough water and potassium, it actually helps prevent heart disease and improve cardiovascular health.

Used for a long time, both in the process of preserving  products and by-products of hunting and slaughterhouses, fish, as well as agricultural products, and for the taste improvement of food, it contributed greatly to the Zakynthian way of life .

The salt flats at Alykes in Zakynthos operated for around thirty years. In 1980 the site was officially closed by the Greek Government as it was felt that it was no longer worth operating. Since then nature has crept back.

The salt produced there played a special role in shaping the economy of the whole island. 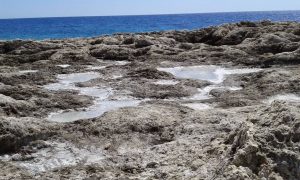 Salt from Alykes was not the only source of salt on our Island.   Afrala was also collected.  It , is a completely natural seafood.  In Zakynthos it was used by  the inhabitants of the mountain villages of the island in the past, a special commodity, which in addition to its use for delicious enjoyment of their food but also for the maintenance of various foods. 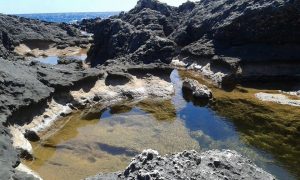 The process of collecting Afrala.

So when they reached the right places, they started collecting the salt, the Afrala, which was done in three different categories.

The first included the pure Afrala, with the pure white crystals, known as Hionati meaning  Snow White. This would be used on the village salads.

In the second category, Afrala did not have the whiteness of the first type, but was just as delicious. This would be used in preparation for certain types of food, pickling, salting cheese and olives.

Whilst the third category, what was left in the hollow of the rock, which may have contained some sediments, remnants of small pieces of rock or soil. Its use was mainly for the manufacturing of soap. 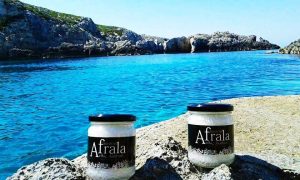 Today we still refer to this category of salt, collected by the inhabitants of some of the mountain villages of the island,  as “Afrala”.

It is the privileged mountain villages have.  As it can be gathered for free,  they are the ones that have access to the sea.  On the north-western rocky shores of our island, areas not easily accessible.

Provided that there are in the rocks naturally formed, some recesses, basins, called lobes.

The lobes collected sea water, which then evaporated from the hot summer sun, leaving the salt.

In the past, of course, in order for the villagers to reach the lobes, a well-designed business was needed. 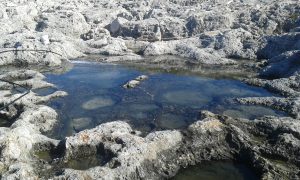 At other times, two or three people would go down together and camp, after taking supplies with them for a few days. If they could not find Afrala, they would intervene by filling the lobes with seawater. This is even done today as we can see in the photo below.

The season can start from May and end, depending on weather conditions in September. July and August obviously with the hot summer sun give ideal conditions.

Collecting Afrala is time consuming and it is important that the sun has evaporated all the seawater. Therefore, rain and summer storms would put the villagers on edge as strong waves, caused by winds of 5 or 6 beaufort could enter the sea lobes and destroy all the salt that was collected. 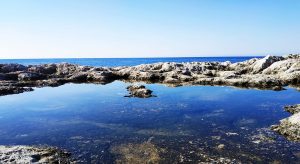 Where can you find Afrala?

Areas for collection are many, Volimes, Exohora, Maries just to name a few.  The paths are difficult and very steep at times,  one would certainly need a local to guide you down. 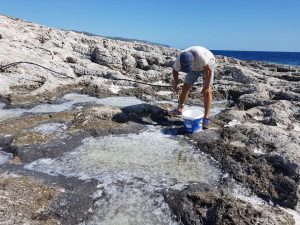 One of the villagers, Zakynthos Informer got in touch with was Dimitris Kladis. A young entrepreneur who has brought back the traditional way of collecting Afrala.  The area that he collects from, Roxa, well known for its rugged beauty,  and among the rock area it is a perfect area to collect the purest Afrala. It’s people like Dimitri that continue the traditions of the past. Providing us with a true Zakynthian product collected from our crystal clear waters, dried under the Zakynthian sun and delivered with love to our homes.

Louise is Australian born and has been a Greek citizen since 1991. She has deep cultural ties with the island, often writing about Zakynthian Traditions and Culture. She is also an active member of the Volunteer Group of Zakynthos, Giostra Di Zante and is a member of the women's choir "Rodambelos". Her love of the island and all it offers saw her joining the Zakynthos (Zante) Informer admin team in 2014.
Previous George Floyd death: Minnesota governor decries violent protests
Next Private rocket takes astronauts to space station 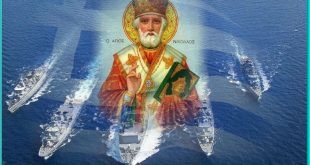 We know him here, in Zakynthos, as Agios Nikolaos. (Saint Nicholas). For many Zakynthians, St. …