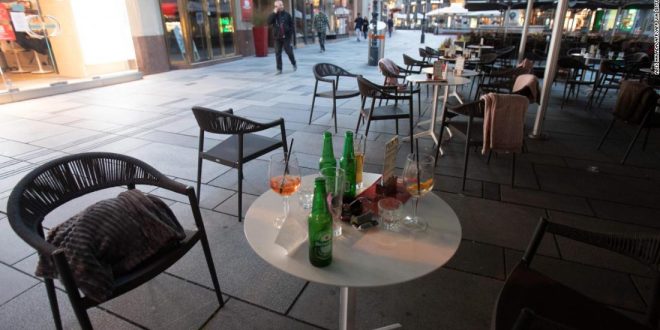 Austria: Easing of restrictions due to the pandemic, on 19 May

Louise Inzk 10th May 2021 International, News Comments Off on Austria: Easing of restrictions due to the pandemic, on 19 May

The finalization and details of the opening scheduled for May 19 in Austria in the fields of catering, tourism, culture and sports, were announced in the afternoon in Vienna by the federal Chancellor Sebastian Kurtz, after the consultations he had from the morning, through teleconference with the governors of the nine L οnder, the Austrian coalition government of the People’s Party and the Greens.

The government and the other parties have agreed to largely withdraw the restrictions imposed by Covid-19 from Wednesday 19 May, when tourism, catering, cultural, recreational and sporting activities will reopen, but with restrictions. From May 17, students of all school levels return to their classes with physical presence.

The condition for entering the restaurant is that someone has been tested, or has recovered from the disease or has been vaccinated. In catering but not in retail, there will be a record requirement to stay there for more than 15 minutes.

In private gatherings, ten adults and children are allowed to meet indoors during the day, but only four at night.

According to the federal chancellor, there will be further opening steps by July 1 at the latest, which could then apply to weddings, big celebrations and club events.

The fact that this path can be followed is due to the fact that Austria passed the third wave of the pandemic better than its neighbors, said Sebastian Kurtz at a press conference in Vienna this afternoon.

At the same time he urged caution, as, as he noted, the better all the restrictions that will continue to apply, the faster the opening steps will be possible.

For his part, Vice Chancellor and leader of the Greens Werner Kogler pointed out that “in nine days – on May 19 – life in Austria will be more colorful again – safely.”

In a statement earlier in the day, Chancellor and People’s Party leader Sebastian Kurtz said the new infections were below 1,000 in the last 24 hours and that the incidence was seven days (ie infections within seven days per 100,000). residents) is already below 100, indicating “that the first steps will come at the right time in nine days”.

“We expect this trend to continue in the coming days and that we have good conditions for a resumption next week, when about three million people have already been vaccinated at the same time as the opening,” he said.

Louise is Australian born and has been a Greek citizen since 1991. She has deep cultural ties with the island, often writing about Zakynthian Traditions and Culture. She is also an active member of the Volunteer Group of Zakynthos, Giostra Di Zante and is a member of the women's choir "Rodambelos". Her love of the island and all it offers saw her joining the Zakynthos (Zante) Informer admin team in 2014.
Previous Britain: Further easing of restrictions in England is expected on 17 May
Next Mitsotakis: The digital green certificate will allow safe travel in the summer