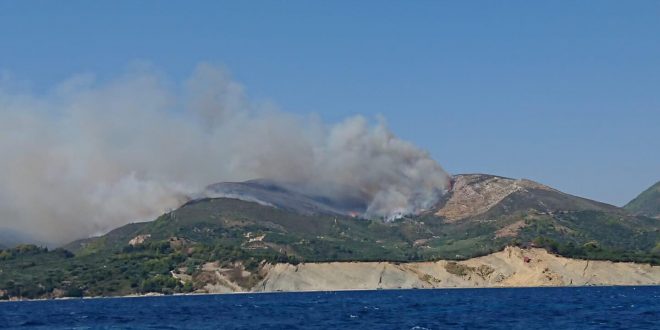 Fire in Agalas/Keri and Lithakia area

In the last hour a large fire has started and is well alight in the forest area close to the village of Agalás in Lithakia. Residents are now being ordered to evacuate as a precaution.

The islands fire service are on the scene and air support had also been requested to help put it out. Air support have just arrived on the scene with witnesses stating between 4-6 helicopters flying towards the site.

Four aeroplanes have now been confirmed as arriving on site, loading from the sea to drop water directly from above onto the fire.

The fire is producing a lot of smoke with flames on the hilltop, visible not only from the bay of Laganas but also from Zakynthos Town too. Zakynthos Mayor Nikitis Aretakis is on location in Agalas, at the fire front and helping authorities to co-ordinate the effort of the prevention of fire spread and damage to local areas.

The fire is now being fought on two fronts. The Vice Governor of Zakynthos Mr. George Stasinopoulos is currently there at one of the fire fronts. The islands fire fighters are attempting to stop the fire reaching Keri. At present one of the fire fronts are threatening a farm house in the area of Floro.  Meanwhile the second fire front has reached the mining area Xifita and is moving towards the solar panels located in fields nearby.

KTEL bus service is also on standby with a bus situated at Agalas for prevention reasons, for evacuation purposes if needed. We do have reports of an abandoned building in one of the fronts succumbing to one of the fire fronts, at present there is no further damage to property.

The fire is being fanned by high winds and is now in the areas of Keri, Lithakia and Agalas. As a precaution The authorities have ordered the evacuation of Agalas and Keri villages and locals have been informed. The evacuation is taking place with help from KTEL buses.

Please avoid travelling in these areas and obey Instructions by authorities.

We have just learned that despite doing the best they could a house in Keri has been lost to the fire and burnt down. The house, close to a hotel is at present the only habitable building to have been confirmed as destroyed but as a precaution the hotels guest have also been evacuated.

Firefighters and volunteers, are still working both in land and above to try and stop the fire spreading.

Authorities have now put Emergency traffic regulations place because of the fire and the information is as follows:

Vehicles should avoid Keri especially at Lithakia junction of Zakynthos/Keri.

They should also avoid Agalas especially the Zakynthos Koi cross roads. Lake Keri should also be avoided. The road by the taverna in Lithakia is also closed.  Authorities have requested that all these areas not be travelled to. It is necessary so that emergency vehicles can get through as well as for public safety. Road closures may change or be added to so please ensure you follow the instructions of the authorities.

Firemen are still on scene fighting the blaze and a number of other fire officers and engines thought  to total over ten vehicles have now arrived on the island from Kyllini.

There has also been a message from the fire department via the Ionian Echo, asking that people drop off canned food, fruit, water and other drinks at the fire station as the firefighters desperately need it. It’s estimated that there are around 111 firefighters now working on bringing the fires under control.

This will be our last update for this evening. More information will come tomorrow. Please keep our brave firefighters and the island in your thoughts tonight and we hope to have some positive news for you all tomorrow.

View from the sea courtesy of Dan Candish 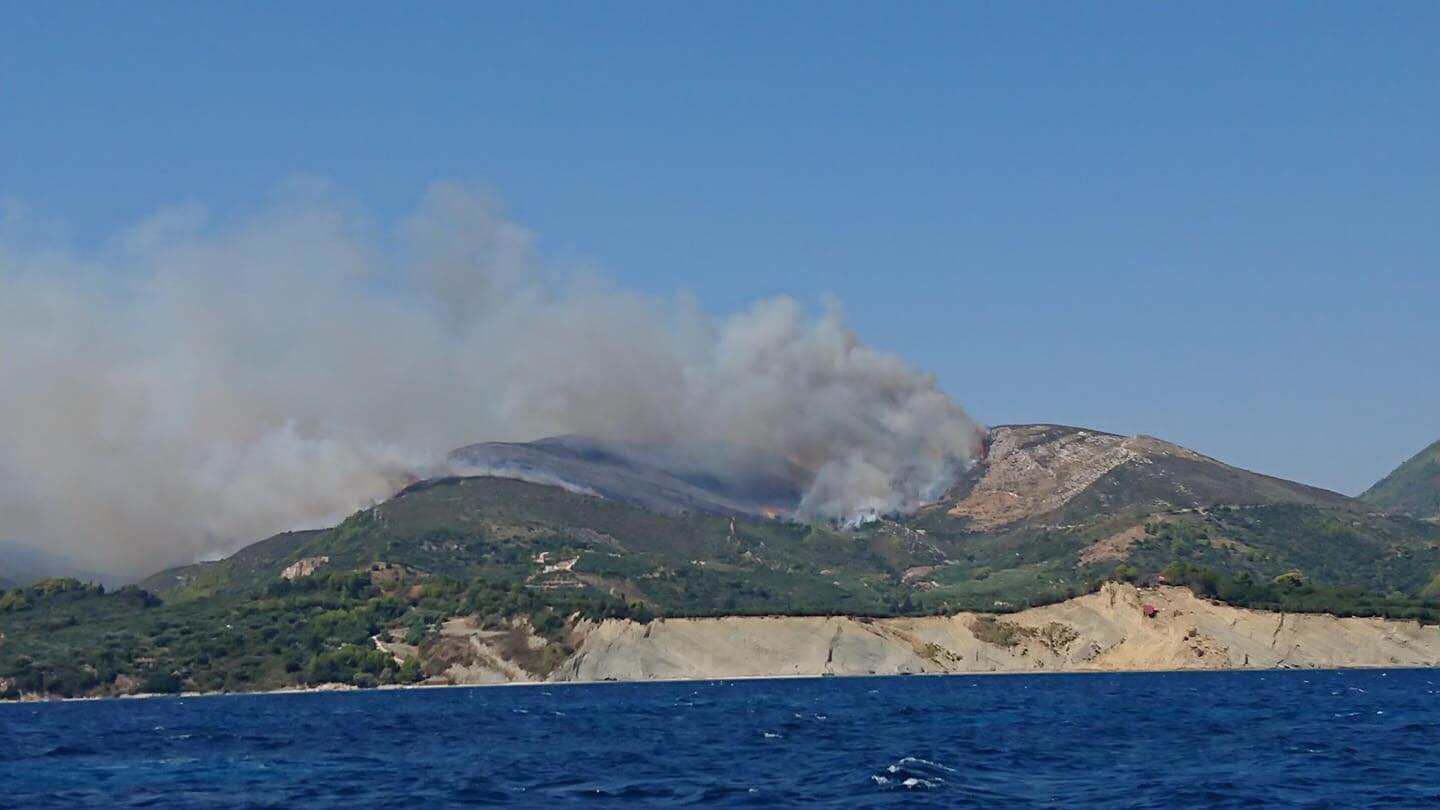 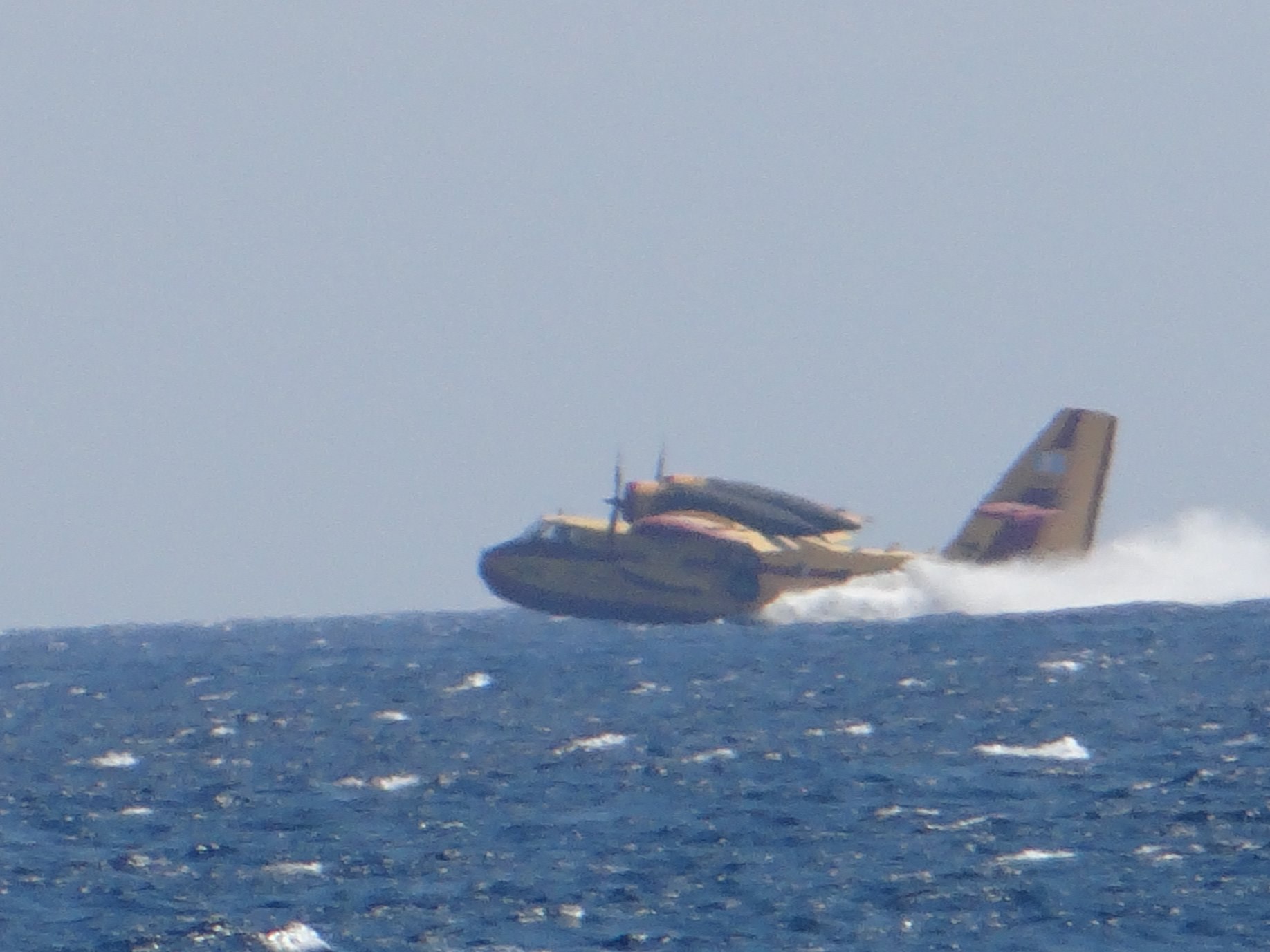 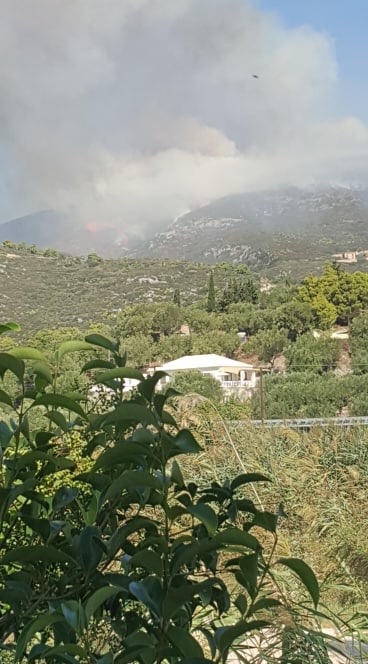 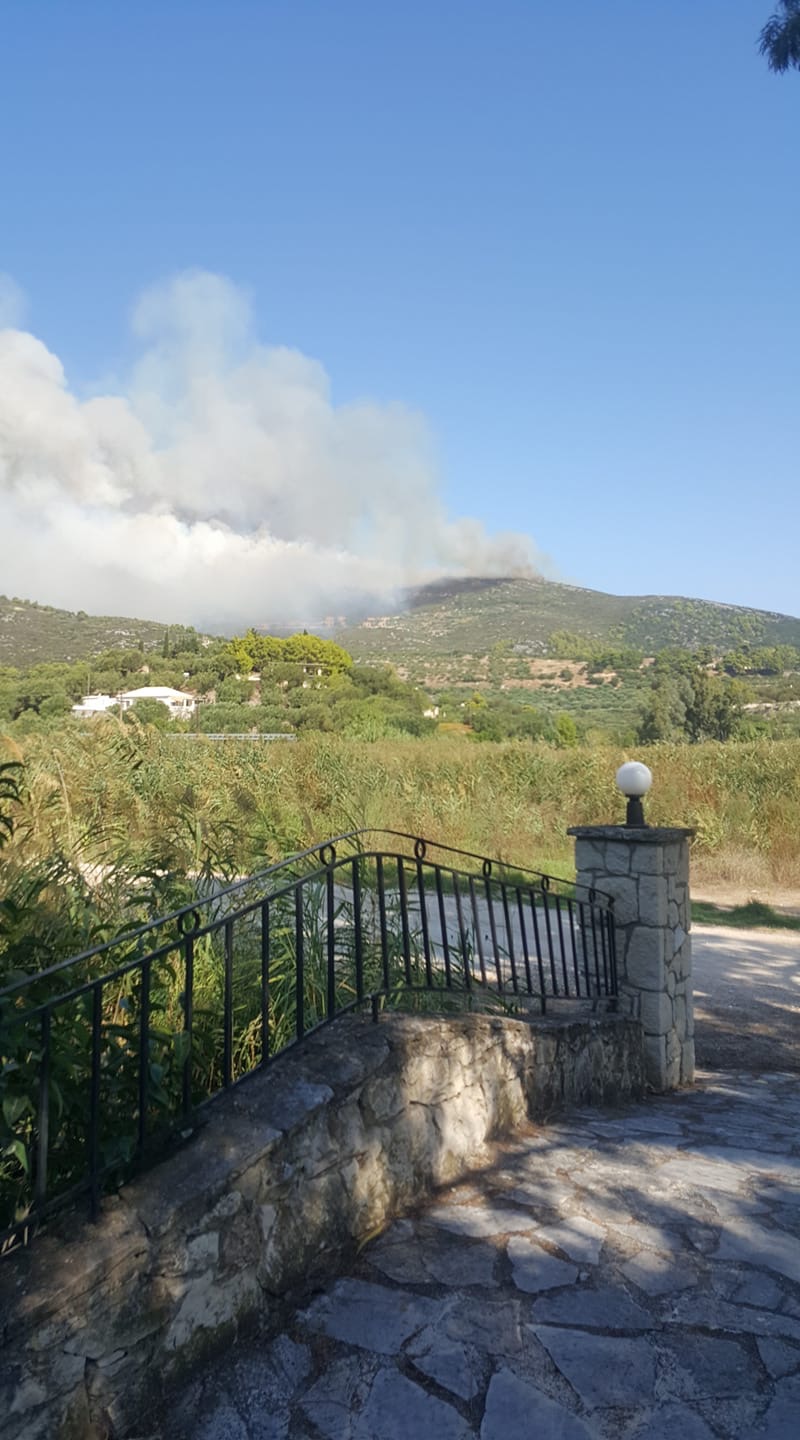 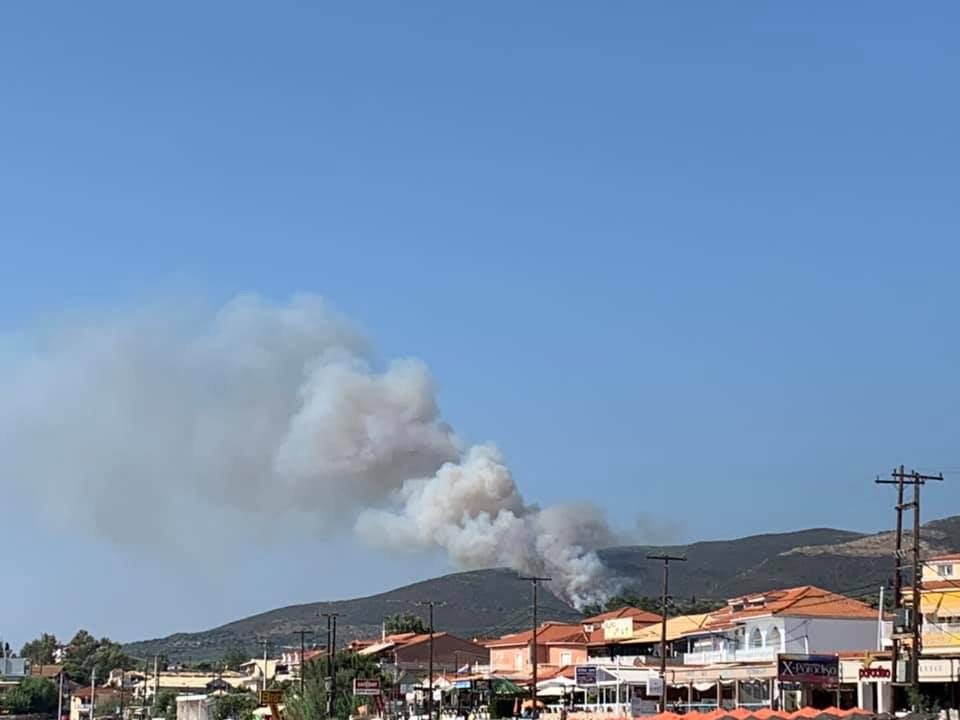 View from the bay courtesy of Stephen Pidgeon 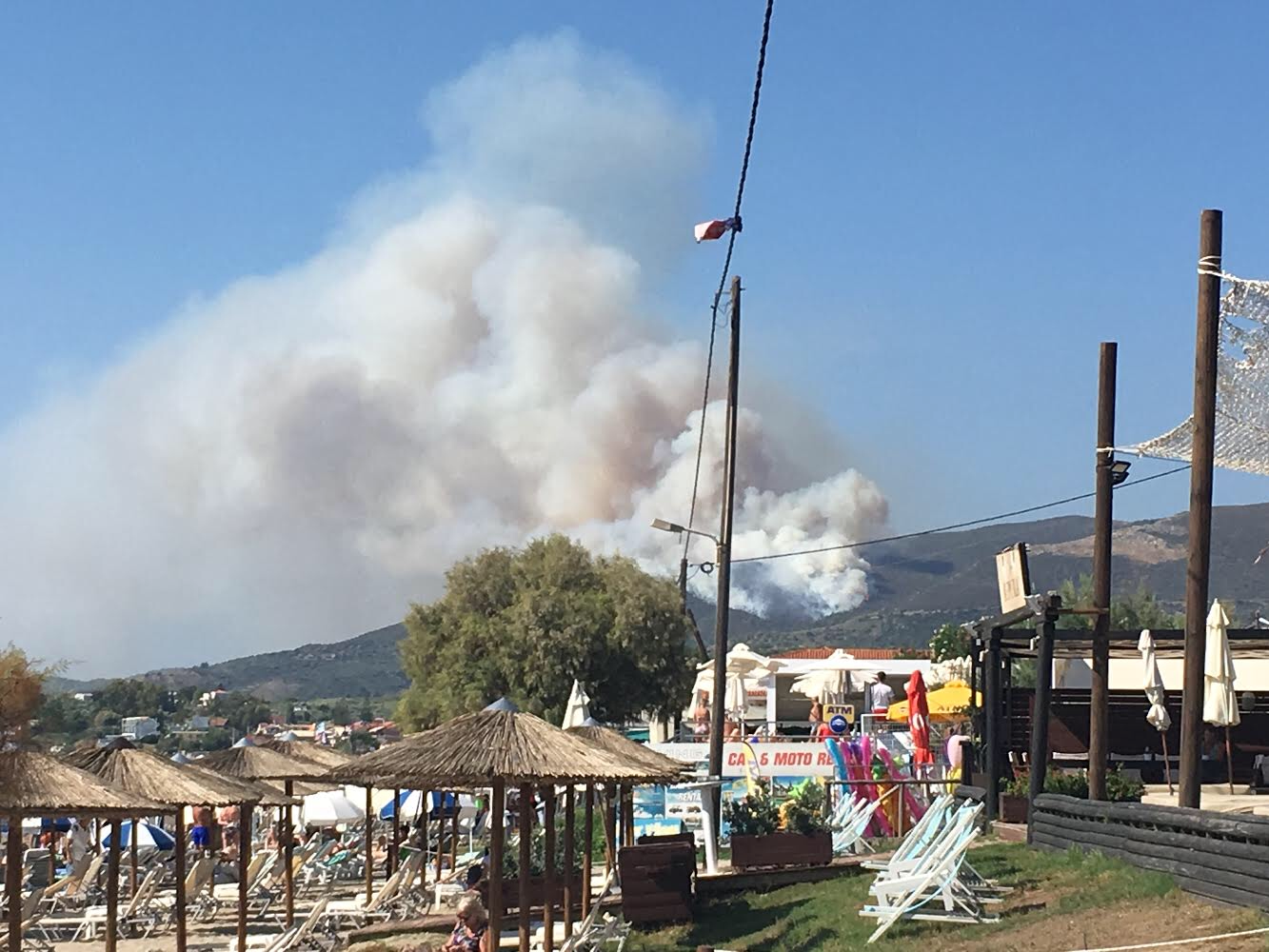 A huge thanks to our Zakynthos Informer members who have supplied images for the post.

More news follows when we get it.

Chrissie Parker joined the Zakynthos Informer Team in 2014. Chrissie’s first experience of the island was a combined birthday and wedding celebration, in true Zakynthian style. Since then she has been able to combine her love of the island, including its incredible history, tradition and culture, with her love of writing.
Previous Saudi oil strikes: US blames Iran for twin attacks
Next Tunisia holds second free presidential election