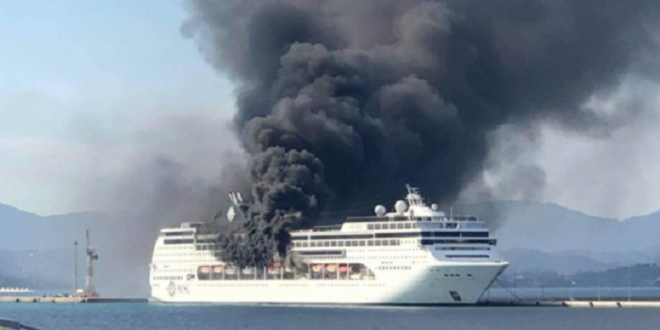 A large fire broke out on a cruise ship located in the port of Corfu.

A fire broke out on a cruise ship in Corfu on Friday afternoon (12/3).

According to corfutvnews.gr, the cruise ship is in the port of Corfu and the Fire Brigade has rushed to the spot.

In addition, according to Mega TV, the fire started from the lifeboats, while the cruise ship has been in port for about 15 days. At the same time, an eyewitness notes that the fire initially started from outside, while it is spreading inside the ship.

Also, life-news.gr reports that strong forces of the fire brigade are already operating while a vessel is expected to participate in the effort to extinguish the fire from the sea side as the ship is located on the inside of the jetty.

Louise is Australian born and has been a Greek citizen since 1991. She has deep cultural ties with the island, often writing about Zakynthian Traditions and Culture. She is also an active member of the Volunteer Group of Zakynthos, Giostra Di Zante and is a member of the women's choir "Rodambelos". Her love of the island and all it offers saw her joining the Zakynthos (Zante) Informer admin team in 2014.
Previous Greece:- Extension of lockdown in Attica – The areas that enter deep red…. Zakynthos remains as a “red” zone and more…..
Next 7 new cases today and its only lunchtime!