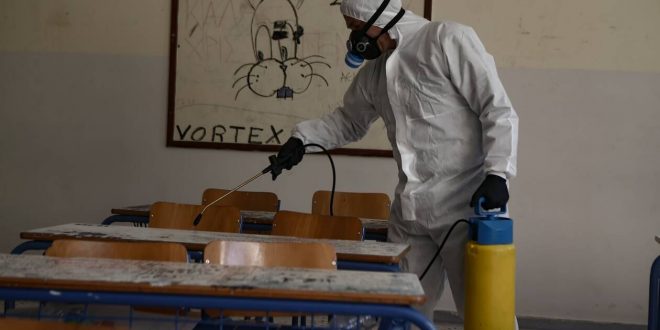 School masks: Optional use due to “safety illusion”

Confusion prevails over the use of a facial mask with Education Minister Niki Keramos stressing that students and teachers are not required to wear it in classrooms.

The Minister of Education, Niki Kerameos, spoke about the use of the mask in schools one day after the presentation of the plan for the gradual return to the desks

She explained how its use is optional and not mandatory and is not recommended by experts. “If someone wants to wear a mask, there is no question,” he said, but quoted Sotiris Tsiodras as saying that the mask provides a “security illusion.”

She also said that the plan to open schools is a government decision, with the unanimous support of the committee of experts. She even added that there were bolder proposals for the opening of primary schools and kindergartens, but a more conservative plan was decided.

“Everyone, every party, can say whatever they want here, we listen to the experts. Either we trust them from the beginning of the crisis, or we don’t trust them. Experts are clearly in favor of the gradual opening of educational structures under certain conditions. We do not do experiments, “said Ms. Kerameos.

Finally, she clarified that the decision to reopen primary schools and kindergartens will be made by the end of May and will depend on the course of the virus and epidemiological data.

What to expect when schools open.

The announcement by the Minister of Education put an end to the anxiety of students, teachers and parents regarding the resumption of classes in schools. On June 15, the Panhellenic Exams start for Public High Schools and on June 16 for Vocational High Schools.

The action plan of the Ministry of Education and Religion for schools was announced by the Minister, Niki Kerameos, during the joint press conference with the representative of the Ministry of Health, Professor of Infectious Diseases Sotiris Tsiodras and the Deputy Minister of Civil Protection and Crisis Management Nikos Hardalias

The action plan of the Ministry of Education, as stated by Ms. Kerameos, is based on the unanimous decision of the National Committee for the Protection of Public Health against the coroner.

“As a government, we have chosen a conservative plan, more modest than some expert proposals, and we are starting a dynamic process: each step will be evaluated, and re-examined if necessary in the context of new data,” she said.

“Based on what the Prime Minister announced yesterday, we are now moving towards the next step, the de-escalation of the measures and the gradual reopening of structures of the Ministry of Education and Religions,” she stressed.

More specifically, the action plan of the Ministry of Education for the gradual reopening of educational structures is as follows:

The schools will operate gradually, in two phases, according to what the minister announced. First, on May 11, the students of the 3rd year Senior High school will return to the classrooms. Then, on May 18, the students of the 1st and 2nd year senior high, and high schools will return. Also, the school year will be extended to high schools and senior high until June 12. As for the new school year, 2020-21, it will probably start earlier for everyone, from September 1st.

As for primary schools and kindergartens, their suspension will be extended. As the Minister noted, the possibility of opening on June 1 is being examined, and this “only if we are absolutely sure that the course of the epidemic is slowing down.”

However, she stressed that if primary schools and kindergartens reopen this year, the possibility of extending the academic year until June 30 is being considered.

There will be two school zones:

Students will go to schools in rotating sub-departments (resulting from the division of the department into two) in order to reduce congestion within the same room. The distance between students should be 1.5 m and the maximum number of students in a class is 15 people.

Rotating teaching in the two sub-departments. Monday – Wednesday – Friday half of the school will go to school and Tuesday – Thursday the other half, while next week it will be the other way around. The small sections (up to 15 people) will be able to operate daily.

There will be a home study program for the days when students will not be in school.

Special purpose permits continue in both the public and private sectors for parents with children in educational structures that remain suspended. So, if you have a child that is in the venerable group he or she can continue his/her education at home.

There will be antiseptics in schools, there will be natural ventilation. Cleaning will be provided twice a day.

Different breaks will be provided for students.

The canteens will be closed.

It will be an optional to use of a mask in the classroom and in the means of transporting students.

Prior to the start, EODY and ministry directives will be sent to school principals, where communication to teachers, students and parents regarding necessary protection measures will be provided.

There will be special care (provision of leave) for teachers who fall into the category of special leave of absence as defined by the Ministry of Education.

There will be the possibility of an innumerable absence for students who have a special reason (based on a parent / guardian statement about the existence of a vulnerable group at home as defined by the Commission, or in the case of a person who is ill).

There will be a live broadcast of the course through e-learning for those students who have a special reason for absence from school.

There will be an EODY protocol for the management of any symptoms that occur in a member of the educational community – Tracking process with grades depending on each case.

There will be no promotion or graduation exams.

Emphasis will be placed on the coverage of the subject, following instructions from the Institute of Educational Policy.

Student evaluation will be based on four-month grades.

However, Ms. Kerameos pointed out that there is a strong recommendation from the State for vocational training. Prevention measures, ie the distance of 1.5 meters between students and the limit of 15 students per class will also apply to tuition.

For special schools, the Minister of Education announced that their suspension is being extended.

The reopening of Greek-language education structures abroad will take place on the basis of a decision of the education coordinator, depending on the prevailing conditions in each country.

Louise is Australian born and has been a Greek citizen since 1991. She has deep cultural ties with the island, often writing about Zakynthian Traditions and Culture. She is also an active member of the Volunteer Group of Zakynthos, Giostra Di Zante and is a member of the women's choir "Rodambelos". Her love of the island and all it offers saw her joining the Zakynthos (Zante) Informer admin team in 2014.
Previous Coronavirus Measures: The 6 scientific reasons that lead to the reopening of schools.
Next Coronavirus measures:- KTEL coach company “mask compulsory”