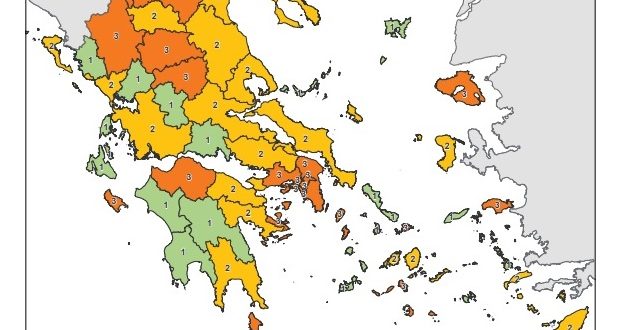 Covid-19 in Zakynthos…. The facts!

The Vice President of the Medical Association of Zakynthos and Director of the Laboratory Department of the General Hospital, Athanasios Markos, responds to the intense concerns of the people of Zakynthos regarding the classification of the island at level 3 within the Health Safety Map. We remind you that our island has been included in a regime of special restrictive measures since August 29 and many of our fellow citizens wonder why these measures have not been lifted since there are not many active cases on our island for several weeks. 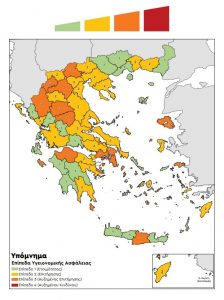 The map of health safety and protection from the coronavirus was presented last Friday and includes 4 levels of preventive measures and rules for each regional unit of the country. These are:

The geographical reference and implementation of the measures is carried out at the level of the regional unit, unless exceptional circumstances arise, according to the protocols of the Ministry of Health and Civil Protection, which justify exceptions at the local level within the regional unit.

Why is Zakynthos at level 3?

Mr. Markou explained in detail to our local newspaper “HMERA” as to the reasons why our island is at level 3. “It is a consideration of many factors. The absolute number of cases is only one parameter. That is, whether we have one, two or eight cases a day in one area is a factor. A second important factor has to do with the tracking carried out by EODY, because the dispersion of the positive cases in the family and work environment is ascertained. When a case occurs in a family of four and the other three are considered potentially positive whether the test is negative or positive. If there are five positive cases from a family of five in Zakynthos one day, this is automatically counted as 25, not 5. Another factor is the general population of the area. There is also a scientific indicator that tells us that per 100,000 inhabitants the area can receive 20 positive cases, which are not the same day. It is 20 per 100,000 inhabitants distributed at a depth of 14 days, which is not measured 1-14 and from 14 to 28, but from 1-14 a fourteen days, from 2-15 a second fourteen days and so on. Therefore, it is taken into account: a) the total number of positive cases, b) what the tracking of positive cases has shown based on the family and professional environment, c) what is the general population of the area and all this together, with the tolerable limit of 20 positive cases per 100,000 inhabitants in a period of 14 days. At the Hellenic Health Authority (EODY), scientists, epidemiologists, infectious disease specialists and statisticians take all this into account and come to a conclusion. When what results is above the tolerable average – and there seems that there are few cases in the area – it is classified in orange “.

A very important role for the ranking of Zakynthos at level 3 was played by the fact that it was declared as a holiday destination by many tourists who tested positive for the virus. Mr. Markou said that: “For Zakynthos, in addition, it was mentioned as a travel destination and passage of tourists, who continuing on somewhere else were found to be positive with the virus. This does not mean that they caught a coronavirus in Zakynthos. For example, tourists were found at “El. Venizelos airport” positive with coronavirus and when they did the tracking and asked where they had been on vacation, our island was often mentioned. In other words, it was often a stopover for tourists who tested positive for the virus. Finally, the fact that tourists tested positive for the coronavirus after their vacation on the island also played a role, as did the British, even though these cases had not been recorded here. But it was a reference point that showed that there may have been something in Zakynthos that may not have been recorded. ”

There are a total of five active cases on the island these days. These are two tourists staying at the quarantine hotel and three Zakynthians. Specifically, the hotel accommodates a couple from Slovakia and a Frenchman. The man tested positive for the virus. Of the Zakynthians, one is admitted to the ICU by intubation. This is the 56-year-old bus driver, who had underlying diseases and his health condition is considered by the treating doctors to be consistently difficult. A 66-year-old and a 68-year-old have also been found to be positive for the virus, and are in good health and remain under self isolation.

55 people were accommodated in the quarantine hotel

Mr. George Tsourounakis spoke to “HMERA” about the tourists who are staying at the quarantine hotel as well as about the efforts made by the staff throughout the difficult season. “Currently, the hotel is hosting a couple from Slovakia and a Frenchman. A total of 55 people were accommodated in the hotel. The contract we have with the ministry expires on October 31, but if someone comes after the 25th of the month, he will not be able to leave on October 31, because he will have to stay for 14 days in quarantine at the hotel. If necessary, the operation of the hotel will be extended and we will stay for a few days without a contract. The staff has done very well. No cases have been reported so far and they are tested regularly. We hope the season ends without any surprises. It was a very difficult case. Management was not easy. We had regular contact with EODY and with the Abulance Services ( EKAB) and with the Civil Protection. The people staying at the hotel were having problems. They felt a lot of psychological pressure because they had come for a vacation and suddenly found themselves locked in a room. ”

The 56-year-old is hospitalized in the ICU

Regarding the tests that are performed daily at the General Hospital of Zakynthos, the Director of the Laboratory Department notes: “On average, we do around 25 to 28 tests a day and everything turns out negative. Since the beginning of October we have done a total of 280-300 tests and only 3 have tested positive. The number of tests we do daily includes preoperative check-ups of patients who are admitted, patients who are required by their health status to take tests, as well as those of staff returning from leave. On Monday we did a total of 40 tests, because 15 were for the new auxiliary staff that was hired at the hospital. That number, that is, does not indicate an increase in cases. About 10 people come to the hospital every day with symptoms similar to coronavirus. A total of 100 cases have been identified on the island since the beginning of the pandemic. ” For the total number of cases, Mr. Markou clarifies that there may be a small deviation from the actual number (by 1-2) because the cases reported by EODY can be counted with a slight delay.

for the full story in Greek click on source link https://www.imerazante.

Louise is Australian born and has been a Greek citizen since 1991. She has deep cultural ties with the island, often writing about Zakynthian Traditions and Culture. She is also an active member of the Volunteer Group of Zakynthos, Giostra Di Zante and is a member of the women's choir "Rodambelos". Her love of the island and all it offers saw her joining the Zakynthos (Zante) Informer admin team in 2014.
Previous Golden Dawn Court: 13 years imprisonment for leadership, life for Fyssas’ murderer
Next Great Barrier Reef has lost half of its corals since 1995