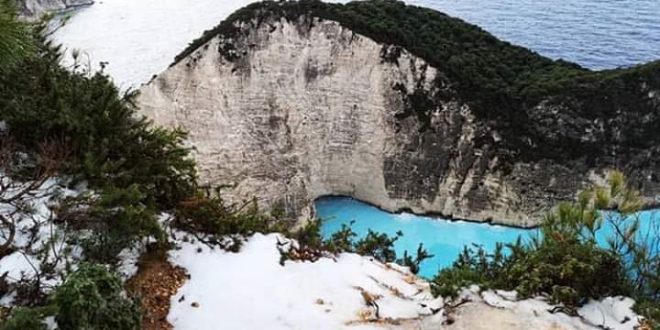 Dreaming of a white Chritsmas!!!

As the song goes,  we were dreaming for a white Christmas, it seems to have been a wee delayed but all the same Zakynthos has once again dressed herself in white.

As weather conditions changed dramatically on Friday afternoon with temperatures dropping to a low of   minus two,  it started to snow and to fall slightly within the mountainous regions of Zakynthos with it becoming heavy overnight.

The morning saw most Zakynthians wake with a smile… a white Christmas after all.

The rare view from my window with Mt. Skopos covered with snow at the top was a pleasant surprise…a rare sight in deed. Although I have seen the mountain tops covered in the Brachionas, it is not such a common sight for Mt.  Skopos, perhaps the only year I can recall was last year where the snow had actually dusted the street I live in,  the village of Ambelokipi. This year,  unfortunately it didn’t settle to give that extra awe of such a phenomena.

Prohibition of vehicles, apart from four wheeled drive vehicles, was announced early in the morning as snow again began to fall and concern that roads had formed ice would cause more problems.

The department of civil protection in Zakynthos and the Regional Offices were quick to get machinery set up to deal with the unusual problems and try to clear the roads that had closed off villages.  These were the roads of Machairado – Kiliomenos, Lithakia – Agalas – Kiliomenos, Agia Merina – Gyri and Katastariou – Volimes

It even seemed that the most famous landmark of Zakynthos had a few white touches as you can see in Barbara Theodosi’s photo.

The social media took off like a blizzard with pictures of Zakynthos dressed in white, a perfect day it seemed for Zakynthians to enjoy their last days of Christmas holidays as their celebrations slowly come to an end.

Louise is Australian born and has been a Greek citizen since 1991. She has deep cultural ties with the island, often writing about Zakynthian Traditions and Culture. She is also an active member of the Volunteer Group of Zakynthos, Giostra Di Zante and is a member of the women's choir "Rodambelos". Her love of the island and all it offers saw her joining the Zakynthos (Zante) Informer admin team in 2014.
Previous Train murder accused: I’m innocent until proven guilty
Next Shipwreck…. measures need to be taken!