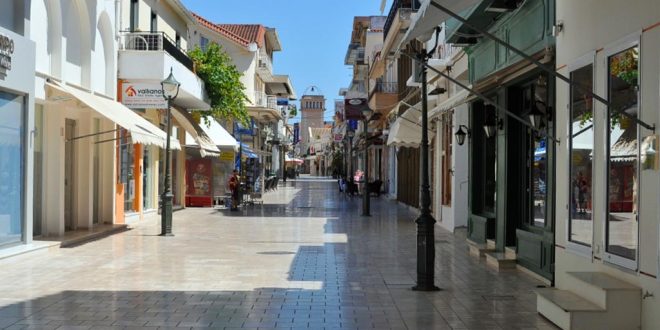 Lockdown: The Next Steps to Getting Back to Normal – What’s happening on Monday.

What opens next week – In the near future the exact framework for gyms and music in the restaurant.

The further relaxation of the lockdown and the restrictive measures to prevent the spread of the coronavirus in our country is gradually progressing, while on Friday the summer cinemas opened their doors with a maximum capacity of 75%. From a week and specifically on Monday, May 24, OPAP PLAY is rolling, while on May 28, the shows and concerts in the open air return with 50% fullness.

It is also noted that on May 31, the gyms are expected to reopen for everyone, with the exact framework to be determined by the measures to prevent the transmission of the coronavirus being clarified by the end of the month. According to the information, the scientists in the coming days are expected to give the green light to allow music in restaurants from the beginning of June but also to the expressed desire of the Ministry of Development to increase the limit on wedding attendees which has been set at 100 people by their reopening next month.

As the Minister of Development, Adonis Georgiadis, pointed out, speaking to ANT1, “we want people to work in catering and receptions on the terms of catering. If there are large spaces, there is no reason to limit people. This is the permanent position of the ministry, but the committee is the one that decides “, said Mr. Georgiadis, while regarding the curfew schedule, he stated that from the beginning of June an extension of the curfew from 00.30 (half an hour after midnight) can be considered, which as is today and that fortunately in the summer there will be the abolitionaltogether of this measure.

The measures that we “have forgotten” and still remain in force.

The use of the mask is mandatory in all indoor and outdoor areas, meaning everywhere both in catering and on public transport.
Three people in cars (with the driver), with a mandatory mask when not a family and two people in business (taxi).

The number of taxi passengers increases to three passengers from two.

The number of passengers allowed in taxis (plus the driver) increases to three from two, according to the new Joint Ministerial Decision, published today, Saturday, May 22 in the Government Gazette. Another measure being removed from lockdown against coronavirus spread.

Specifically, the new decision stipulates that in the transport sector:

Up to three passengers are allowed in the EDX vehicles (taxi, special rental) and passenger cars. as well as in EIX vehicles with driver up to 7 seats.

Up to four passengers more than the driver are allowed in EDX special rental vehicles and passenger IX vehicles with a 9-seater driver.

Up to 3 people are allowed in the double cab of mixed and VAN type vehicles.

Measures in force in focus.

Catering controls will also be intensive, as the rules by which it must operate are specific.

It is reminded that:

Customers are only allowed outdoors and should be seated and not standing.
The distances to the tables should be from 0.70 to 1.70 cm / 6 people. Masks should been worn when entering and departing and may be removed whilst seated. however,  if someone wants to get up from the table he should wear his mask.
The operation of the semi-outdoor areas will be done without air conditioners.

The beneficiaries of the free self tests through the pharmacies are increasing, since from Monday, May 24, they will be available to both private and public sector employees as well as to self-employed professionals.

The right to provide a free self test to all employees is extended
As announced by the relevant announcement of the Civil Protection, from Monday 24 May until Saturday 29 May 2 self tests (from 1 per week) will be available through pharmacies to all employees in the private and public sector with a dependent employment relationship, but and to those who have sole proprietorship.

In fact, as announced through the same announcement, by Thursday, May 20, a total of 13,596,127 self tests had been made available to 3,251,334 citizens and 9,072,577 digital statements had been submitted. Finally, 19,641 positive cases have been recorded – after confirmation of the result of the self test with PCR or rapid test.

on June 1, the Green Digital Certificate for residents

It is essentially the digital evidence that someone has been vaccinated against the pandemic, either tested negative or recovered from Covid-19 disease. The purpose of the certificate is to facilitate the safe free movement of citizens within the EU during the pandemic.

More than 100 thousand citizens aged 40-44 have made an appointment for a vaccine.

The Minister of Health, Vassilis Kikilias, expressed his satisfaction for the response of the 40-44 ages to the vaccination program. Speaking from the vaccination center of the Kalamata Health Center, the Minister of Health noted that more than 100 thousand citizens aged 40-44 have already made an appointment. “We will continue to vaccinate with them and even faster,” he said.

“This shows the huge will and interest that exists from all Greeks, at any age, to make an appointment and get vaccinated. It is also obvious that our health professionals work with professionalism, self-denial and, above all, treat our fellow citizens with dignity and respect, in the way we want the State to function in its relationship with the citizens. “And now is the example of the way we vaccinate throughout the country, of how the relationship between the Greek State and citizens should be understood, in the provision of services – in our case health services”, stressed the Minister of Health.

Louise is Australian born and has been a Greek citizen since 1991. She has deep cultural ties with the island, often writing about Zakynthian Traditions and Culture. She is also an active member of the Volunteer Group of Zakynthos, Giostra Di Zante and is a member of the women's choir "Rodambelos". Her love of the island and all it offers saw her joining the Zakynthos (Zante) Informer admin team in 2014.
Previous Greece:- Coronavirus and vaccine updates for Saturday, 22 May
Next Greece:- Digital Green Certificate: From June 1 available for the Greek residents