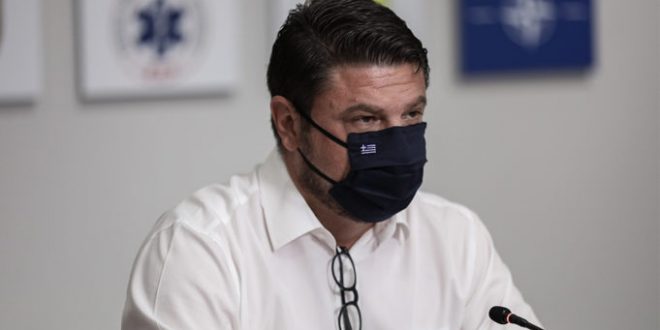 The new measures announced include:

The limit of 50 people for public and social events, except those to which special rules apply, such as restaurants, theatres, cinemas, until August 31, in epidemiologically affected areas.

Ban on the operation of restaurants and entertainment venues from midnight until 7 in the morning throughout Attica, until 31 August. Also, the ban applies to Crete and Eastern Macedonia and Thrace.

Special measures in Paros and Antiparos. Suspension of any kind of event, a limit of nine people in each public gathering. Limit of people at the tables of the shops. Masks everywhere.

The package of measures for Poros is extended until August 24, with the only difference being the closing of the stores at midnight instead of 11.

Compulsory use of a mask in areas of high coloration within camps, social solidarity structures and accommodation for refugees and immigrants.

Preventive laboratory testing for the new coronavirus of all those returning from leave to nursing homes and those working in high-crowded areas (eg in camps, social solidarity structures and refugee and immigrant accommodation) under the responsibility of employers or employers.

The members of the groups at increased risk for serious coronavirus disease who work in the public and private sector will henceforth work in telework or in a back office, at the choice of the employee, until August 31st.

“The next 24 hours are crucial, all will depend on the course and outcome of things in the battle with the invisible enemy.  This will be in order not to have to take extra measures that will be disastrous for the economy, businesses, our families “, said Mr. Hardalias.

“The data of the last few days show a dispersion in tourist areas and at younger ages and we know that these people will return to their places of residence”, said the Deputy Minister of Civil Protection and drew attention to the individual responsibility of the citizens: “There can’t be a police officer for every citizen” he said.

Appeal of discipline for the feast of the 15th of August.

“This year and this day will be different. We will celebrate it as the conditions require, observing the rules recommended by the experts and Archbishop Ieronymos stressed in a recent statement “, pointed out Mr. Hardalias and reminded the measures in force:

Limitation of one person per 5 sq.m. with a minimum distance of 1.5 meters inside churches.

For churches over 500 sq.m. the maximum number of 100 people is valid.

Recommendation for mask use

Recommendation for generalized mask use for a week in all areas by those travellers returning from holidays in areas with a burdensome epidemiological picture.

Recommendation for special care of strict observance of sanitary measures and use of masks in temples and other places of worship as well as places where high concurrence is expected in view of the ceremonies and celebrations of the 15th of August.

Recommendation for special attention and emphasis on individual hygiene measures during and after the wave of return from vacation, especially on public transport such as ships. There will be a great mobilization of the port for the observance of the measures and the imposition of the relevant sanctions.

Recommendation for the use of a mask in all enclosed spaces and the obligation to use a mask in outdoor gatherings where the indicated distances cannot be observed.

Source and full story plus video in Greek click on https://www.ert.gr

Louise is Australian born and has been a Greek citizen since 1991. She has deep cultural ties with the island, often writing about Zakynthian Traditions and Culture. She is also an active member of the Volunteer Group of Zakynthos, Giostra Di Zante and is a member of the women's choir "Rodambelos". Her love of the island and all it offers saw her joining the Zakynthos (Zante) Informer admin team in 2014.
Previous Coronavirus Tests ordered at ports of Piraeus and Rafina on Aug 16
Next Stonehaven train derailment: Crash investigators confirm train struck landslip