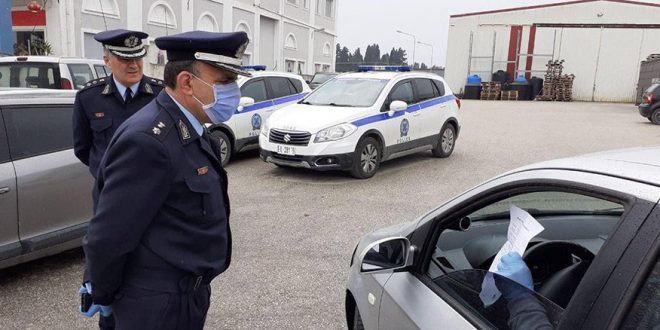 Greece:- Results of Police checks in regards to measures combatting the spread of coronavirus

Louise Inzk 16th May 2021 Greece, News Comments Off on Greece:- Results of Police checks in regards to measures combatting the spread of coronavirus

The results of Police checks, volations recorded and fines imposed.

Intensive checks are carried out throughout the country by the Hellenic Police Services to implement measures to prevent and limit the spread of the coronavirus.

Yesterday, Friday 14 May, 53,241 inspections were carried out throughout the country, of which 16,227 at the Athens International Airport “Eleftherios Venizelos”.

A total of 287 violations were confirmed and 3 arrests were made, as follows:

9 in Eastern Macedonia and Thrace,

8 in the South Aegean,

3 in the North Aegean,

3 in the Ionian Islands,

3 in the Peloponnese and

Since the entry into force of the measure (November 7, 2020), a total of 191,786 similar violations have been confirmed.

32 in the Ionian Islands,

2 in Eastern Macedonia and Thrace,

1 in the South Aegean and

In the above cases the following sanctions were imposed for violation of suspension of operation, etc. related infringements of the relevant provisions, namely:

In Western Greece, an owner of a healthcare store was arrested and fined 5,000 euros for exceeding business hours and playing music, as well as a fine of 300 euros for 64 customers and 2 employees for violating traffic restrictions.

In Crete, a fine of 2,000 euros to a cafe owner, with the imposition of a 15-day suspension, for serving customers sitting inside the store and a fine of 300 euros to 3 customers.

In Epirus, from 3,000 euros fine on 2 taverns, with the imposition of a 15-day suspension of operation, for serving seated customers inside the stores.

In Attica, 2,000 euros to a store owner of a health interest for playing music.

In Eastern Macedonia and Thrace, one arrest of a person for quarantine violation.

In Thessaloniki, 1,000 euros to a cafe-bar owner for playing music.

In the Peloponnese, an arrest and a 5,000 euro fine per person for violating quarantine.

In the South Aegean,

–1,000 euros fine in a restaurant for playing music and

In Western Macedonia, 5,000 euros to a foreigner for non-compliance with health protocols when entering the country.

Since the implementation of the new measures (November 7, 2020), a total of 6,171 similar violations have been confirmed and 1,951 people have been arrested.

The inspections continue with undiminished intensity for the protection of public health.

Louise is Australian born and has been a Greek citizen since 1991. She has deep cultural ties with the island, often writing about Zakynthian Traditions and Culture. She is also an active member of the Volunteer Group of Zakynthos, Giostra Di Zante and is a member of the women's choir "Rodambelos". Her love of the island and all it offers saw her joining the Zakynthos (Zante) Informer admin team in 2014.
Previous Zakynthos:- First Loggerhead Sea Turtle (Caretta-Caretta) nest to start the season recorded.
Next Zakynthos:- Rapid Test results from KOMY