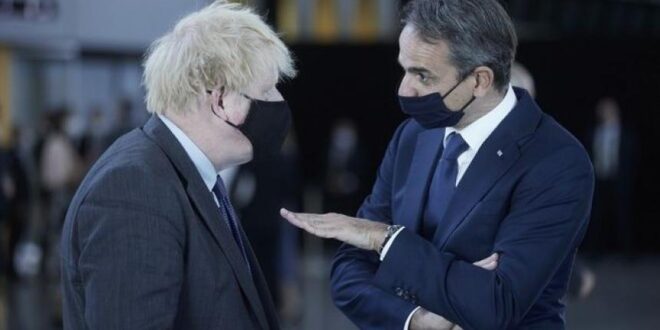 Mitsotakis & Johnson: Greece is a safe country for British tourists – What they discussed about Greek-Turkish

Louise Inzk 14th June 2021 International, News Comments Off on Mitsotakis & Johnson: Greece is a safe country for British tourists – What they discussed about Greek-Turkish

During the meeting, the Prime Minister informed Mr. Johnson about the positive epidemiological course of the country which, in his opinion, allows the lifting of restrictions, by the British government, on the visits of British tourists to Greece and asked not to discriminate from European countries the United Kingdom.

The Prime Minister briefed his counterpart on the recent developments in Greek-Turkish relations, stressing the need to maintain the de-escalation, so that the dialogue can work and a climate of trust can be gradually created. He also stressed that any next steps towards the resumption of negotiations on the Cyprus issue can be agreed only within the given and binding framework of the relevant Security Council Resolutions, which provide for a solution of a Bi-zonal Bicommunal Federation

The two leaders also discussed the implementation of the EU-UK Agreement, including the so-called Irish Protocol, as well as the positive prospects for the Alliance through the NATO 2030 Agenda.

Finally, the Prime Minister thanked the Prime Minister of the United Kingdom for the invitation to attend the Summit of Leaders, in the framework of the 26th Conference on Climate Change (COP-26), in November 2021, in Glasgow, which he accepted.

Louise is Australian born and has been a Greek citizen since 1991. She has deep cultural ties with the island, often writing about Zakynthian Traditions and Culture. She is also an active member of the Volunteer Group of Zakynthos, Giostra Di Zante and is a member of the women's choir "Rodambelos". Her love of the island and all it offers saw her joining the Zakynthos (Zante) Informer admin team in 2014.
Previous Greece:- Coronavirus Measures lifted from today.
Next Greece:- National labour strike Wednesday 16th June including ferries