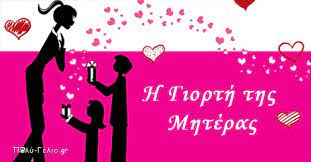 Mother’s Day today – How it started to be celebrated

Liz Osborn 9th May 2021 Greece, International, News Comments Off on Mother’s Day today – How it started to be celebrated

“Mummy, mum, mother”: The most important and sacred person in our lives is honoured on Mother’s Day and is a small reminder of the most tender relationship in our lives.

How Mother’s Day began to be celebrated

The first references to Mother’s Day come from Ancient Greece. Gaia was the wife of Uranus in Mythology. In her personified Nature, who gives birth to the whole world she was worshiped as the supreme deity.

In modern times, Mother’s Day was established in the 19th century.  The American Anne Maria Reeves Jarvis organized for the first time, in 1865, a movement called “Mothers Friendships Day” and similar meetings.

The Feast of the Mother in Greece was associated with the feast of Ypapantis, on February 2nd. Since the Orthodox Church then honours the fact that the Virgin Mary and Joseph go to the Temple with Jesus just 40 days old to receive the “blessing”. (this blessing is still given to new born babies and mothers by the church at 40 days )

However, since the 1960s, Greece has followed in this western celebration and, now, Mother’s Day is celebrated on the second Sunday of May every year.

Liz Osborn's first experience of the island was as a holiday rep in 1992. She fell in love with everything Zakynthian and has been here since then. Liz became a Greek citizen in 2003 and has been active in tourism and the Greek life over the years. Liz's support of the island saw her joining the Zakynthos Informer team in 2020
Previous Greece:- Vaccination updates for Saturday 8th May including Zakynthos
Next Greece:- Coronavirus update for Sunday 09 May