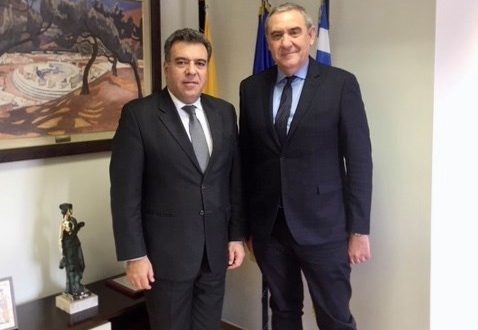 The MP of Zakynthos, Mr Dionysios Aktypis met with the Deputy Minister of Tourism. Yesterday in a particularly warm climate Mr Akypis and Mr Konsola talked about a number of things in regards to our Island.

“In a particularly warm climate, yesterday, Tuesday 14th January, I had a meeting with the Deputy Minister of Tourism, Mr. M. Konsola. During the meeting, I was given the opportunity to present to Mr Konsola a series of important issues, which have long been of concern to the inhabitants of Zakynthos. Among other things we discussed issues related to the imperative for the local economy, the need to improve the tourist infrastructure of the island.

The issue of support for businesses and workers affected by the financial collapse of Thomas Cook has been at the centre of today’s debate. The Minister informed me in detail of all the measures taken in this regard, and made it clear that the aim of the Ministry was to heal the wounds of the business as soon as possible in cooperation with Thomas Cook. Specifically, Mr. Konsola informed me that the Ministry of Tourism is in constant cooperation with the Ministry of Finance in order to provide a definitive solution to the problem created by non-payment of VAT invoices.

In addition, a major topic of discussion was the maintenance and restoration of the “Panagiotis” ship, which is the central attraction of the world-famous “Navagio” beach in Zakynthos. We agreed that the authorities, the productive classes and the scientific associations should work together, with the common aim of preserving the unchanged image of the landscape, which made our island world famous and a tourist attraction, even during the winter time.

Finally, there was widespread discussion both about the development of cruise tourism in Zakynthos and the forthcoming exploitation of the Zakynthos marina.”

Louise is Australian born and has been a Greek citizen since 1991. She has deep cultural ties with the island, often writing about Zakynthian Traditions and Culture. She is also an active member of the Volunteer Group of Zakynthos, Giostra Di Zante and is a member of the women's choir "Rodambelos". Her love of the island and all it offers saw her joining the Zakynthos (Zante) Informer admin team in 2014.
Previous World on alert for 2019n-CoV infection
Next The Volunteer Group of Zakynthos helps homeless with books.