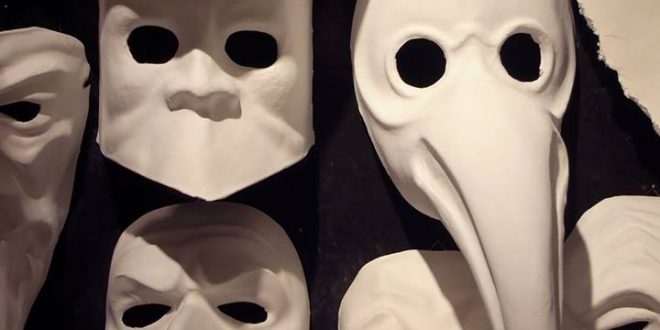 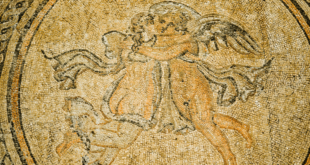 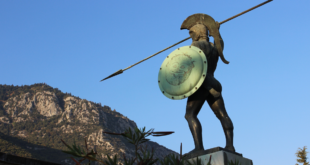 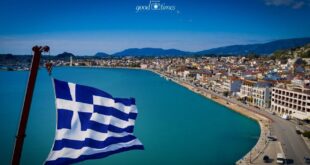 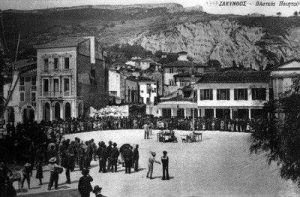 It is believed that its roots were based on an imitation of the Venetian carnival and the Italian Commedia dell`Arte, known to us Zakynthians as “omilies” a form of theatre characterized by masked “types” which began in Italy in the 16th century and was responsible for the advent of the actresses and improvised performances based on sketches or scenarios. The closest translation of the name is “comedy of craft”; it is shortened from commedia dell’arte all’improvviso, or “comedy of the craft of improvisation”. Originally, it was called commedia all’improviso. This was to distinguish the form from commedia erudita or learnt comedy that was written by academics and performed by amateurs. At least one performance of the Commedia dell’Arte is proved to have taken place in 1611 in Crete. After the fall of Handakas (Heraklion) in 1669, many Cretan artists fled to Zakynthos, and had a great influence on art and music, literature and theatre. 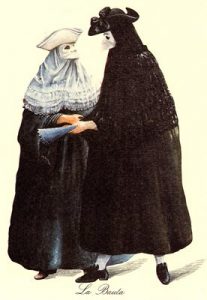 During the carnival of the 17th Century, people would cover their faces with masks and saunter down the streets and squares. The usual costume of the time was called the “Bauta” Masks derived from the Carnival of Venice.
The bauta (sometimes referred as baùtta) is a mask, today often heavily gilded though originally simple stark white, which is designed to comfortably cover the entire face; this traditional grotesque piece of art was characterized by the inclusion of an over-prominent nose, a thick supraorbital ridge, a projecting “chin line”, and no mouth. The mask’s beak-like chin is designed to enable the wearer to talk, eat, and drink without having to remove it, thereby preserving the wearer’s anonymity. The bauta was often accompanied by a red or black cape and a tricorn.

The rich organized dance balls, the common people amused themselves in so called “omilies.” The difference being that all roles, including that of women, were played by men. Thus being very comical and appealing to the people. They were presented in Zakynthos from the mid-17th Century onwards, the first taking place in 1666 in the main square of Zakynthos town, then from 1780 they were also played in the villages. 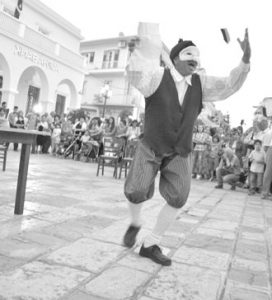 Originally, the performances started on a Sunday morning, at noon on other days, and were usually performed in front of the houses of the rich. After the performance, two masked men would collect money from the spectators on the street and on the balconies.
Greek and international classical stage plays, broadcasted by local folk poets in Zakynthian dialect, were performed as “omilies” for example, Erotokritos, Erofili, Romeo and Juliet, The Sacrifice of Abraham, The Hasis, Gianniotes, The lover of the shepherdess, Esme , the Turkish woman, Eugena, just to name a few.
Until the beginning of the 19th Century, the Zakynthian carnival was a popular and famous event, visitors from all over Greece would come to take part in the events. Thereafter, the tradition gradually faded into oblivion until it was successfully revived over recent years. Today there are “omilia” groups that have successfully entertained the Zakynthians, and even now in the villages they are rehearsing their omilies, some as early as Christmas ready to perform their plays during carnival – the plays would usually take place from the Thursday before the main Carnival Parade (Tsiknopempti) until Cheese Sunday (Kyriaki tis Tyrinis), bringing laughter to the streets, once again. 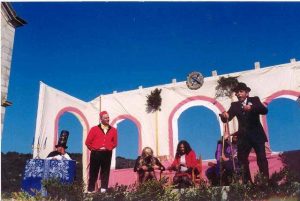 Unfortunately, we do not see the famous “Bauta” as much as we should and the ties to the Venetian type Carnival. Nevertheless, the Zakynthian Carnival still has its own character and will always remain a tradition in every Zakynthian heart.

Louise is Australian born and has been a Greek citizen since 1991. She has deep cultural ties with the island, often writing about Zakynthian Traditions and Culture. She is also an active member of the Volunteer Group of Zakynthos, Giostra Di Zante and is a member of the women's choir "Rodambelos". Her love of the island and all it offers saw her joining the Zakynthos (Zante) Informer admin team in 2014.
Previous “Today workers smile really!” Anarchists stage protest at supermarket branch
Next Johnny Bobbitt: Two admit GoFundMe hoax about homeless man 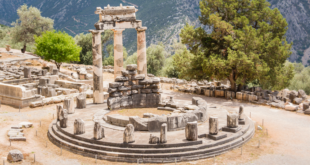