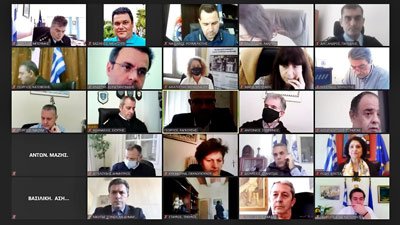 Regional Meeting with Services… “health protocols” those entering from abroad

“The vigilance of the law enforcement agencies is requested for controls in the ports and in permanent centers of gathering of citizens”
– “Appeal to the Medical Associations for the frugal issuance of travel certificates”
– “Application of the 14-day quarantine especially in the case of those entering from the border checkpoints of Kakavia and Evzoni according to the Government Gazette 1154 / 24.03.2021”

The object of the package of measures and actions to prevent the spread of the coronavirus (COVID-19), in the Regional Units of Kefallonia & Ithaca and Zakynthos, was the object of the working meeting held by teleconference on the initiative of the Regional Governor of Ionian Islands Ripherios Civil Protection Nikos Miliotis.

The head of the Ionian Islands Region, in her inaugural statement, described the moments we are experiencing as critical for the Ionian Islands and the health of the citizens, calling for vigilance, coordination, cooperation and strict adherence to measures to overcome the problem, protect health and obtain an image of a safe destination in view of the beginning of the tourist season.
“I ask for your personal and service vigilance and cooperation to defuse the crisis and we will spend the Spring safely. Everyone is watching us. Tour agents and Embassies contact me. We have no choice but to prove that we can safely move on to the next day. It is important, now, to record the weaknesses of the system of implementation of measures and the requests of the institutions in order to transfer them to the competent centers and to launch solutions “said Rodi Kratsa.

It was decided within the next ten days to organize actions and actions:
• With Kyllini as a reference point as a gateway for Zakynthos and Kefalonia-Ithaca, to intensify the controls and to request from the competent authorities written instructions and the possibility of conducting a rapid test at sea.
• To “run” an awareness and information campaign of the citizens with social messages that will be shown through the television and radio stations, the newspapers and sites that have a reach in the Ionian Islands.
• Mobilization of active citizens and Voluntary Groups of Zakynthos through the Civil Protection Offices, providing them with printed material to the citizens.
• A call will be addressed to the Municipalities of the Ionian to assist in any way and in the controls, information and prevention for the safety of the citizens.

Also, reports were made on the application of the 14-day quarantine especially in the case of workers in international land transport, who enter from the border checkpoints of Kakavia and Evzoni in accordance with the provisions of Government Gazette 1154 / 24.03.2021 on the imposition of measures of temporary restriction of land, air and sea connections of the country, the ban on entry into the country of third-country nationals other than the countries of the European Union and the Schengen Agreement and the sampling and temporary restriction of persons entering .

The Deputy Regional Head for Social Cohesion, Public Health and Employment, Costas Zorbas, also called for the intensification of the efforts to comply with the health protocols, pointing out that “we must be careful. The heavy burden falls on all of us. It is the period when contracts are concluded, when decisions will be made about which areas will be opened, how they will be opened. We have kept the Ionian at good levels through the campaign that started last year at the start of the pandemic. Our image is spoiled. We must not give in. “Now we need to intensify measures and vigilance.”

The Deputy Regional Minister of Civil Protection, Nikos Miliotis, made a special mention of Zakynthos, addressing elected, military and service officials, stating “I know that it is a difficult area, difficult after Athens and I say this because of knowledge. It is not possible for us to receive information that something is happening next to the square and those who should know about it and act turn a blind eye. We ask for awareness of these citizens, who at the expense of the society of Zakynthos and at the expense of their health do what they want without thinking about the consequences. You have to be fully vigilant and determined because people can die and we have an obligation to prevent it. ”

Louise is Australian born and has been a Greek citizen since 1991. She has deep cultural ties with the island, often writing about Zakynthian Traditions and Culture. She is also an active member of the Volunteer Group of Zakynthos, Giostra Di Zante and is a member of the women's choir "Rodambelos". Her love of the island and all it offers saw her joining the Zakynthos (Zante) Informer admin team in 2014.
Previous Sunday 28/3/21 – 4 new cases – 190 cases in March – 4 patients in the Covid clinic
Next Coronavirus:- How pollen increases contagion – Precautions and hours that should be avoided.