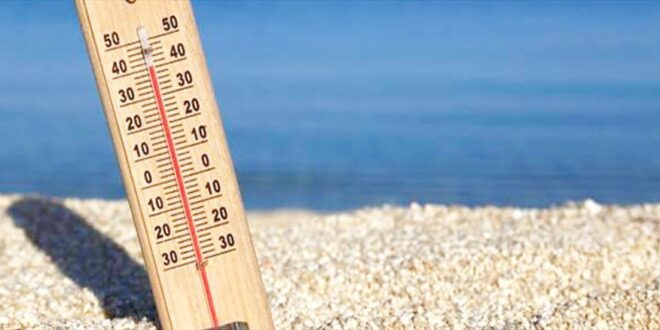 The temperature will remain at very high levels for the season today, Easter Monday, with the exception of the north western part of the country, where it will drop slightly.

Light clouds are expected from noon in the Ionian and the mainland that will thicken and in the evening in the north there will be local rains.

Concentrations of African dust in the atmosphere will be limited in the east and south of the country.

The winds will blow west northwest 3 to 5 and in the Ionian locally 6 Beaufort.

See the forecast of EMY in detail:

Weather: Light clouds that will gradually thicken at noon from the west. In the evening there will be localised rain mainly in the east and possibly in central – eastern Macedonia and Thrace late at night isolated thunderstorms.

Winds: West northwest 3 to 4 and in the morning locally 5 Beaufort. From late afternoon in the east they will turn to east directions and in the evening they will reach the Thracian at 5 Beaufort.

Temperature: From 12 to 29 degrees Celsius.

Weather: Light clouds, which will gradually thicken by noon.

Winds: Northwest 3 to 4, strengthening from noon to 4 to 5 and in the Ionian locally 6 beaufort.

Temperature: From 13 to 32 degrees Celsius. In the north the maximum is 2 to 4 degrees lower.

Weather: Few clouds, which will gradually thicken in the afternoon.

Winds: West northwest 4 and locally 5 Beaufort. From noon they will turn to east directions up to 4 Beaufort.

Temperature: From 13 to 33 degrees Celsius.

Weather: Few clouds, which from late afternoon in the Cyclades will thicken.

Winds: West northwest 4 to 5 Beaufort, gradually turning to east in the afternoon, weakening.

Weather: Few clouds, which from late afternoon in the north will thicken.

Winds: In the islands of the eastern Aegean southwest 3 to 5 Beaufort turning to noon in the north with the same intensity. In the Dodecanese west northwest 3 to 5 and in the area of ​​Kastellorizo ​​gradually up to 6 Beaufort.

Temperature: From 18 to 31 degrees Celsius. In the north 2 to 3 degrees lower.

Weather: Few clouds, which will thicken in the afternoon.

Winds: West northwest 5 Beaufort with weakening. From noon they will turn to east directions up to 4 Beaufort.

Temperature: From 16 to 32 degrees Celsius.

Weather: Few clouds, which will thicken in the afternoon. At night there is a possibility of local rain.

Winds: West northwest 3 to 4 and in the morning up to 5 Beaufort.

Temperature: From 13 to 26 degrees Celsius.

In central, eastern Macedonia, Thrace and its islands

north eastern Aegean, clouds are forecast with localised rain and in the morning sporadic thunderstorms, with rapid improvement from the west.

In the rest of the areas few clouds, temporarily denser in the morning.

The winds will blow from north directions 4 to 6 and in the seas temporarily locally 7 Beaufort.

The temperature will drop significantly in relation to its maximum , mainly in the central and northern parts.

Liz Osborn's first experience of the island was as a holiday rep in 1992. She fell in love with everything Zakynthian and has been here since then. Liz became a Greek citizen in 2003 and has been active in tourism and the Greek life over the years. Liz's support of the island saw her joining the Zakynthos Informer team in 2020
Previous Restaurants and cafes opening See what fines will be imposed when the measures are not observed
Next Traffic ban The schedule is changing today