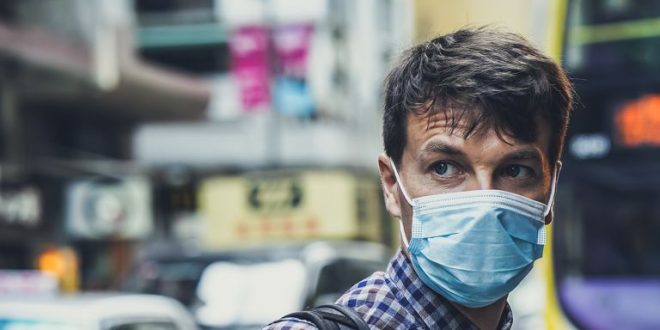 Louise Inzk 2nd May 2020 Greece, News, Uncategorized Comments Off on The use of facemasks all you should know for Monday 4/5

Nikos Hardalias, during the daily briefing, gave additional explanations and instructions on where the citizens should wear a face mask from next Monday (4/5).

In essence, he acknowledged the many changes that have taken place over the past 24 hours and attributed this to the fact that the scientific community as a whole, as well as governments, are constantly learning things about the virus, explaining that no one knows everything and that no one is able to give a clear answer to all the “hot” questions about the spread of the virus.

So during today’s (2/5) announcement, Nikos Hardalias referred to the use of a face mask and said that it is mandatory. Specifically, he said for:

He also informed that the mask is mandatory for employees in:

At the same time, according to the Deputy Minister of Civil Protection, strict recommendations for the use of a mask are provided for:

Mr. Hardalias stressed that “citizens and the state mechanism are preparing for our new daily life, which will be more complex, as the gradual lifting of measures should not jeopardize what we have achieved so far.” “On Monday we will move to the second phase with the invisible enemy always present,” he added.

He stressed the need to faithfully follow all the rules that govern our new daily lives. “We are trying, we are preparing so that the health system can deal with the situation in the new phase as well” he stressed and added that the situation remains critical and our stay on alert and vigilance is imperative.

What applies to supermarkets?

Already this Saturday morning (2/5), the Legislative Content Act was published for the measures to deal with the covid-19 pandemic, while it provides for what will happen if there is a case of a coronavirus in a supermarket. Specifically, Article 9 stipulates that in the event of a case of coronavirus, the operation of certain parts of the company will be suspended and not the whole company. In particular, the operation of only the distribution and supply facilities will be suspended. This decision only applies to grocery stores and supermarkets, mini markets, public markets, organized food markets and pharmacies.

Definitely use a mask when using public transportation.

The Minister of Infrastructure and Transport, Mr. Costas Karamanlis, focused on the prevention of passenger traffic management in Public Transport during the relaxation of restrictions, speaking to SKAI. Mr. Karamanlis also referred to the 300 passenger assistants who will be at 45 important Metro bus stations.

“What we are trying to do is to prevent it instead of curing it. We are trying to solve the problem of crowd management before they get on the trains and vehicles. For this reason, all employees who are responsible for inspections on buses and trains and additional staff, which will reach 300 people, will be at 45 bus and metro stations, ie in Omonia in Syntagma, in Ampelokipi, in Syggrou – Fix, in large stations and will help the passengers so that they can safely get on the subway, buses and trams. Because what is important at the moment is public health “, explained Mr. Karamanlis.

“We can’t put a police officer on every bus and train to impose penalties. What will play a special role is everyone’s individual responsibility, “he added. He also noted that everyone in the public transport should wear masks, while the fines will be imposed by the police, with which, as he said, the Ministry of Infrastructure and Transport is in full cooperation and which he thanked for its help.

“It simply came to our notice then. The issue is prevention. The issue here is that everyone must think of themselves and their neighbours, “said Mr. Karamanlis. The Minister of Infrastructure and Transport once again thanked the employees of the Public Transport, as last week, with the establishment of the administrations of the organizations, they were in their positions, so that on Monday there would be full operational readiness.

Pointing out that the limit for people per car does not take into account, for example, large families, Mr. Karamanlis commented that there will logically be tolerance when it comes to young children, while in terms of taxis, he noted that when  someone is accompanying an adult person or child  going to a doctor, there would be no problem. He said he understood taxi drivers, but public health was paramount

Louise is Australian born and has been a Greek citizen since 1991. She has deep cultural ties with the island, often writing about Zakynthian Traditions and Culture. She is also an active member of the Volunteer Group of Zakynthos, Giostra Di Zante and is a member of the women's choir "Rodambelos". Her love of the island and all it offers saw her joining the Zakynthos (Zante) Informer admin team in 2014.
Previous Coronavirus:-Greece updates
Next David Gomoh stabbing: Two held on suspicion of murder