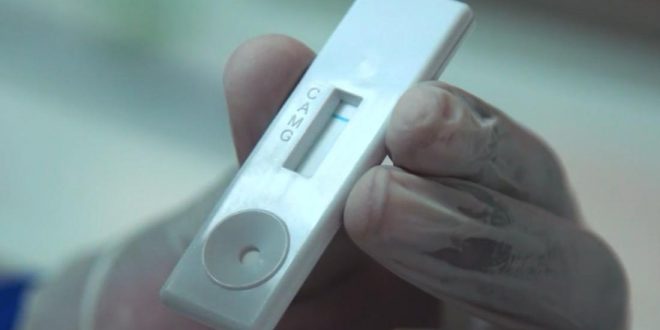 Two self – tests from Monday for all employees

Liz Osborn 21st May 2021 Greece, International, News Comments Off on Two self – tests from Monday for all employees

Two self tests (one for the week from May 24 and one for the next, from May 31). Will be available through pharmacies from May 24 to 29, to all employees in the private and public sector. Both with a dependent employment relationship, as well as to those who have a sole proprietorship. This according to a written briefing by the Deputy Minister of Civil Protection and Crisis Management, Nikos Hardalia.

As mentioned in the announcement, in this way the availability of self tests to all employees of the country is expanded. With the obligation to declare the result on the platforms of Ergani – for employees of the private sector with a dependent employment relationship And the inventory – for public sector employees.

As it is underlined, until yesterday, a total of 13,596,127 self tests were made available to 3,251,334 citizens and 9,072,577 digital statements have been submitted. According to the announcement, these data rank Greece at the top of Europe. Specifically among the top 4 countries of the European Union in terms of conducting mass self-diagnostic tests, based on the ECDC.

Finally, 19,641 positive cases have been recorded – after confirmation of the result of the self test with PCR or rapid test.

It is noted that for the self tests will follow a relevant announcement from the competent Ministries of Labour and Social Affairs and Interior.

Liz Osborn's first experience of the island was as a holiday rep in 1992. She fell in love with everything Zakynthian and has been here since then. Liz became a Greek citizen in 2003 and has been active in tourism and the Greek life over the years. Liz's support of the island saw her joining the Zakynthos Informer team in 2020
Previous 2,020 new cases of coronavirus in the country – 56 deaths and 617 intubated
Next Greece:- Coronavirus and vaccine updates for Saturday, 22 May