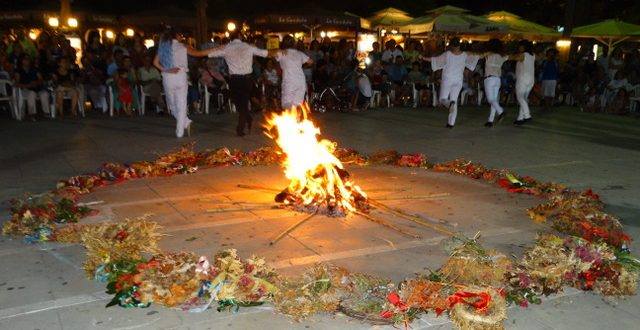 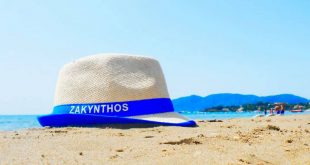 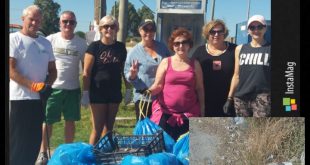 Today in the villages of Gaitani and Lagadakia, a century’s old tradition will take place. It is the fires in celebration of Saint John.

The celebration in years gone by would see Zakynthians gathered together after a long time of farming duties with their “bundles” of chickpeas, which were being sold at that time by several street vendors, who entered “Hora” town.

They would dry them in the sun, making sure they became “toast” and on the evening of June the 23rd they would gather in the squares for them to be lit.

They also took the “wreaths of May”, remembering the wreaths that Zakynthians would display on the 1st of May from the balconies and doors that were hung. They would take them to burn in the flames of the fire, some or mostly women would put an artichoke on the fire to guess their possible future and some would burn garlic. These were old, ancient, pagan customs, which have not only been preserved over the centuries but have also acquired a Christian form. Surviving and over the years these traditions have been given more modern interpretations.

Some say they were warning fires for the birth of the leading prophet, and Christ’s Baptist, who then lit up his fire to spread the news of paradoxical labor. Even Zacharias, his father, did not believe in this miraculous miracle that his old wife, Elizabeth, who was mute, would give birth. That is why this event had to be spread and for it to be known around the world.
These ideas of course, Christians were masquerading from the previous customs. In fact, the Lombards or Lombardides, as they are known in Zakynthos, and more than likely coming from the 6th century where they practiced paganism, are almost universal and are related to the sun’s tides and more specifically to the summer solstice.

Previously, the inhabitants of the earth believed that these days stopped the sun’s journey and that’s why they set fire to reinforce its course and force it to start again. With the prevalence of Christianity, as the official religion of the civilized people, these habits were considered pagan and condemned by clergy and other authorities. The world, however, could not be convinced. The threat of the church and their new faith could not eliminate their fear of life, which only stemed from the brilliant star of the day. So, in fear they kept them, despite the threats and dangers of dying if they practiced them.

The official church then wanted to embrace them and gave them its own complexion. Since then they have been linked to the birth of Saint John the Baptist and Prodromos and by idolatry, they have become Christian customs.

For our island, however, the celebration of June the 24th has a particular stronghold. Prior to the proclamation of Saint Dionysios as a patron saint of Zakynthos, the patron saint of the island was St. John and the day of his birth, even though it was a work day would then become a holy day, with a compulsory holiday.
Saint John’s church was built centruies ago within the castle walls of the old city. He did not acquire a temple in the new city, but he coalesced with Saint Nicholas in the new Metropolis, which was also the parish of foreigners. For this reason, even today, during his summer feast, a wreath hangs over the door of our cathedral, on the sidewalk side, towards Kapodistriou street, to remind us and show that our traditions and customs are in continuation.
Usually the traditions start the night before on the 23rd of June.  Zakynthians will light their fires and hoping good will come their way.

As for the celebration of Saint John’s birthday, you will see a typical Zakynthian “Glendi” with folklore dancing and Zakynthian sweets, the famous “fitoures” will be frying away in their large pans for customers to try and the festival will continue right on til morning light.

Louise is Australian born and has been a Greek citizen since 1991. She has deep cultural ties with the island, often writing about Zakynthian Traditions and Culture. She is also an active member of the Volunteer Group of Zakynthos, Giostra Di Zante and is a member of the women's choir "Rodambelos". Her love of the island and all it offers saw her joining the Zakynthos (Zante) Informer admin team in 2014.
Previous Coronavirus: UK must prepare for second virus wave – health leaders
Next Pakistan plane crash was ‘human error’ – initial report

It’s certainly very hot today, this weekend we are expecting at least 35 in Zakynthos. …