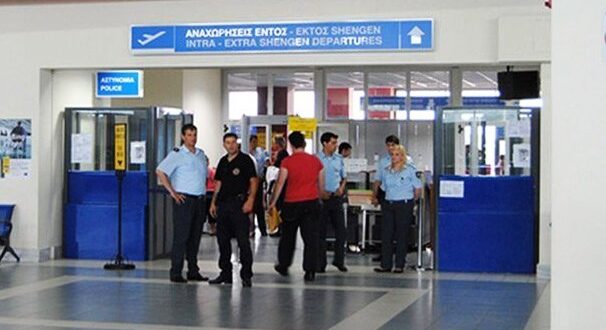 Zakynthos:- Arrests made at our local airport

Louise Inzk 14th June 2021 Local, News Comments Off on Zakynthos:- Arrests made at our local airport

Twelve (12) foreigners were arrested at the airports of Zakynthos and Kefalonia, in an attempt to travel abroad illegally.

In the last few days, a total of twelve (12) foreigners were arrested at the airports of Zakynthos and Kefalonia, during the passport control, who tried to board illegal flights abroad.

In particular, last night (13.06.2021), at Zakynthos airport, eleven (11) foreigners were arrested by police of the Zakynthos Security Department, who, using forged travel documents, attempted to board a flight to Italy illegally.

In a similar case, on Saturday morning (12.06.2021), at the airport of Kefalonia, by police of the Security Department of Argostoli, one (1) foreigner was arrested, who, using a fake travel document, tried to board a flight illegally to Italy.

The arrested were taken to the locally competent Prosecution Authorities.

Louise is Australian born and has been a Greek citizen since 1991. She has deep cultural ties with the island, often writing about Zakynthian Traditions and Culture. She is also an active member of the Volunteer Group of Zakynthos, Giostra Di Zante and is a member of the women's choir "Rodambelos". Her love of the island and all it offers saw her joining the Zakynthos (Zante) Informer admin team in 2014.
Previous Zakynthos:- In consultation until June 26, the bill of the Ministry. Of Tourism – Includes the “Establishment of the Agency for the Management and Utilization of the Shipwreck”
Next Zakynthos:- Press conference by MP, Dionysios Aktypis on the “hot” issues concerning our Island