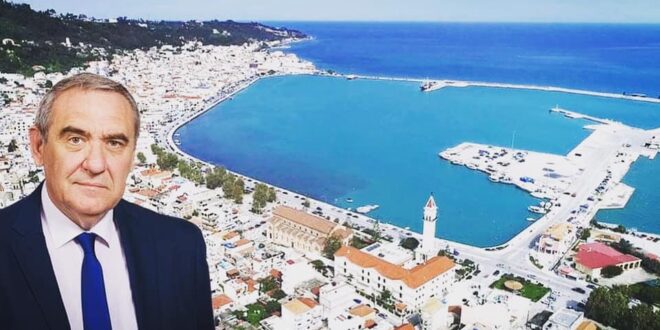 Zakynthos:- Master Plan for our harbour, changes to come.

Louise Inzk 2 weeks ago Local, News Comments Off on Zakynthos:- Master Plan for our harbour, changes to come.

In a press release by our local MP, Mr Dionysios Aktypis the master plan for allowing cruise ships into our harbour has now changed.

The location of the pier for cruise ships in the Master Plan of the Port of Zakynthos has changed. The implementation process proceeds immediately.
More specifically, after the continuous and successive consultations I had with the Political Leadership of the Ministry of Shipping, the request of the local bodies and the local community for construction of the pier at the pier of Agios Nikolaos (SOLUTION 1) today takes shape.
However, changing the position of the pier for cruise ships was one of the most crucial issues on the agenda of the inter-ministerial Port Planning and Development Committee (ESAL) at its recent meeting. The committee, after thorough discussions regarding the specific selection criteria and the conditions that must be met by the location of the pier, decided that the preferred location for its construction is none other than the pier of Agios Nikolaos (SOLUTION 1). It is noted that ESAL had reached Solution 1 in the past, however due to other factors the final decision of the committee moved in a different direction. It is also noted that this position (SOLUTION 1) was suggested as optimal by the project researcher and port expert Marilena Frangou, while at the same time the previous Port Commission and the previous Ionian Islands Regional Council were in favor according to by decision in 2017.

This decision of ESAL is for me personally but also for all the people of Zakynthos a historic decision.
Now the way is wide open for the implementation of one of the most important infrastructure projects that our country has ever seen.
As I have pointed out in the past, my personal view has always been that the project could practically not proceed with the position it had chosen. This is because, quite simply, this position, apart from other important problems it would create, was really impossible to implement due to the extremely demanding and costly interventions and accompanying projects that it required.
.At the moment, always in agreement with the Ionian Islands Region and the Regional Minister Rodi Kratsa-Tsagaropoulou, we are moving towards a more flexible solution and mainly a solution for which the whole of Zakynthos society is strongly in favor.
My dear fellow citizens, our island, although it is one of the top tourist destinations in our country, in recent years has remained in last place in terms of creating new modern tourist infrastructure.
However, we are determined to change the image of our island. We are determined to join the important infrastructure projects that the place needs and which have been left unjustifiably so far behind in recent years.
️Today those who played games of micropolitics and populism on the backs of the citizens of Zakynthos got their final answer.
We do not dwell on words. We are fulfilling our commitments, we are turning the page. We pave the way for the development of cruise tourism as well as yachts. Our goal was and remains the substantial and long-term support, strengthening and development of our local economy and clearly the drastic improvement of the quality of life of the citizens of Zakynthos.

Louise is Australian born and has been a Greek citizen since 1991. She has deep cultural ties with the island, often writing about Zakynthian Traditions and Culture. She is also an active member of the Volunteer Group of Zakynthos, Giostra Di Zante and is a member of the women's choir "Rodambelos". Her love of the island and all it offers saw her joining the Zakynthos (Zante) Informer admin team in 2014.
Previous Greece:- Government platform closed due to 24hour upgrade.
Next Zakynthos:- Over a 120 Police Officers in totaly by the end of June