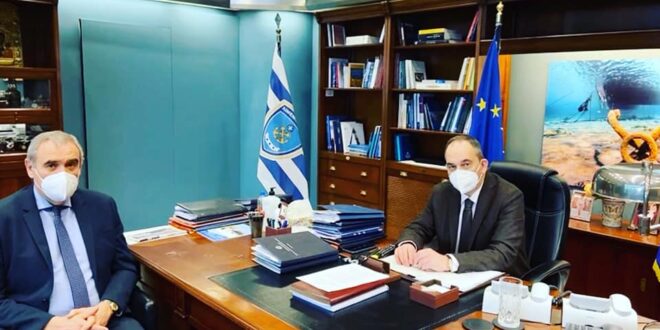 Zakynthos:- Meeting with the Minister of Shipping our MP D. Aktypis requested reinforcement of the Coast Guard in Zakynthos

Louise Inzk 28th January 2021 Local, News Comments Off on Zakynthos:- Meeting with the Minister of Shipping our MP D. Aktypis requested reinforcement of the Coast Guard in Zakynthos

Meeting with the Minister of Shipping our MP D. Aktypis requested reinforcement of the Coast Guard in Zakynthos

The increase of  enforces of the Coast Guard of Zakynthos, the staffing of the Port Station of Agios Nikolaos Volimes as well as the reinforcement of this station with a speedboat was the focus of the meeting he had with the Minister of Shipping and Islanders, Mr John  Plakiotakis..

The MP informed the Minister that the immediate fulfillment of the above requests becomes absolutely imperative, in order for the Port Association of Zakynthos to be able to meet, better and even more effectively the increased demands created by the high traffic of our island, especially during the months of the tourist season.

For his part, the Minister pledged to take every possible action in order to ensure the increase of the organisational powers and the overall strengthening of the Port Association of Zakynthos.

“We had a very constructive discussion with the Minister of Shipping Mr. G. Plakiotakis regarding important issues which need to be resolved immediately. There is no doubt that the Minister is willing to contribute on his part to the effort made for the overall strengthening of the Port Association of Zakynthos. Let me emphasize that among the issues we discussed with Mr. Plakiotakis was that of the imminent change of position of the pier for cruise ships in the Master Plan of the Port of Zakynthos. As the Minister assured me, this issue has already entered the final stretch and will be discussed at the next meeting of the Port Planning and Development Committee (ESAL) “, said after the meeting Mr. Aktypis

Louise is Australian born and has been a Greek citizen since 1991. She has deep cultural ties with the island, often writing about Zakynthian Traditions and Culture. She is also an active member of the Volunteer Group of Zakynthos, Giostra Di Zante and is a member of the women's choir "Rodambelos". Her love of the island and all it offers saw her joining the Zakynthos (Zante) Informer admin team in 2014.
Previous Covid: UK vaccine supplies ‘won’t be interrupted’ – Gove
Next Greece:- Lockdown: Stricter measures considered for stores and schools