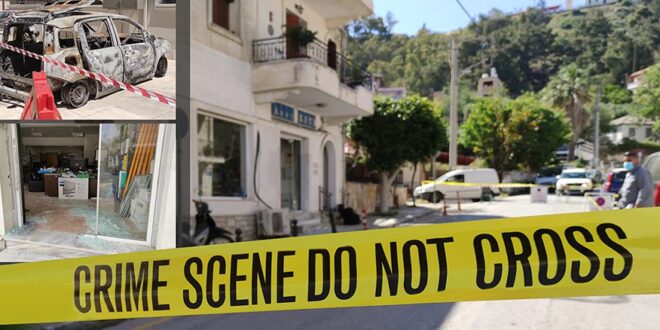 Zakynthos:- Murder of Dimi Korfiati “The perfect crime” – The perpetrators had greased the bullets – Specialist from Hellenic Police Dept. on the island

Louise Inzk 10th May 2021 Local, News Comments Off on Zakynthos:- Murder of Dimi Korfiati “The perfect crime” – The perpetrators had greased the bullets – Specialist from Hellenic Police Dept. on the island

• Dead after being attacked with a Kalashnikov
• Investigations continue – Specialist from the Hellenic Police Dept. on the island

The investigations of the police are in full swing to locate the perpetrators of the murder of the well-known businessman Dionysis (Dimi) Korfiatis, who was mudered on Friday morning (7/5/2021) inside the office of European programs and processes of the Kottis brothers, after an attack with a Kalashnikov.

Police sources speak of a “perfect crime” as the perpetrators seem to have studied their every move. From the first moment, experienced executives of EL.AS (Hellenic Police) were found on the island. from the Homicide Department of the Life and Property Crimes Prosecution Office and the Directorate of Criminological Investigations as well as two OPKEs from Kefalonia and Pyrgos, Ilia.

The local community is watching the developments with shock and can not believe that such an attack took place, early in the morning in the city center and in front of passers-by. The special unit searching the crime scene as well as the point where the perpetrators left the car in which they used in the attack in order to find evidence that will help locate them. So far all the scenarios are open and it is not ruled out that the perpetrators are still on the island. However, from the first moment, the Coast Guard was informed, which participated in the investigations, as it was considered possible for the perpetrators to try to escape by boat. Today, the body will be transported to Patras for an autopsy-necropsy.

According to eyewitnesses, the victim arrived at the office of the Kotti brothers, and after getting out of his armored car he went to the nearby cafe to get coffee with his companion.
He then walked to the office, where a discussion began with the two brothers (Foti and Niko) about an implementation file related to the compensation of his business, which concerned “Ianos”.

According to information, at the time of the attack on the armored vehicle was the security escort – driver of the victim, who at the sight of the perpetrator with a Kalashnikov did not manage to react. The gunman got out of the car, fired a warning shot at the windshield of the armored car, shot at the office window and then entered through the entrance. The victim received the first shots and tried to get up and move to the back of the office, which justifies the fact that the body was found a few meters away from the chair where he was sitting. Fotis Kottis instinctively fell under the desk, a move that protected him from the expulsions of the bullets, while Nikos Kottis received a blind fragment in the abdomen and went to the hospital for first aid without having any risk to his life. Fotis Kottis, after the shock and the movement to be rescued under the office, lost eye contact with the movements of the perpetrator, as a result of which he has no image. The area within a few seconds turned into a battlefield with many of the residents and passers-by (city center) not having understood what was unfolding before their eyes. However, the actions of the perpetrators seemed professional. After the death of the victim was confirmed, by order of the Security, the body remained at the scene for  clues.
The office security camera was out of order. EL.AS, however, he has collected enough material from the cameras of the shops and houses in the surrounding area as well as from all over the city in order to find out exactly what route the perpetrators took.

In total, 28 bullet cases were found at the crime scene. The perpetrators, who had covered their features full face,  fired relentlessly at the businessman.
Shortly after the murder, a silver Fiat Panda car used in the attack was found burnt behind the cemetery of Ampelokipi.

Two Kalashnikovs were found inside.

The perpetrators seemed to have planned their attack very well,  since they had taken very good care to completely cover their tracks. They had hidden their features, the car had tinted windows and they also had greased all the bullets of both weapons to leave no genetic material.

Dead from gunshots, a few months after his wife was killed.

We remind you that last June, his 37-year-old wife was shot dead in Lithakia. In the area of ​​Agios Sostis (Skloumpos) while the unfortunate woman was riding as a passenger on the motorcycle with her husband, she was shot by two perpetrators, who were also riding on a motorcycle and were dressed in black.

Mantas: A pre-announced death
According to the website “documentonews.gr”, the lawyer of the businessman, well-known criminologist Theodoros Mantas speaks of “pre-announced death” and leaves hints for oligarchy of the authorities in this case.
“I can not think of a more accurate and more lenient description of the murder of the businessman in Zakynthos than that of the” previously announced death. In June 2020, the businessman was murdered by two people in Zakynthos, where his wife died.
We had contributed valuable information to the investigation with our lawsuit, before the Prosecutor’s Office of Zakynthos in December 2020, which fully photographed the persons and incidents that led to the tragedy. “Today, the executors completed their mission”, underlines the well-known criminologist.

For Photos of the crime scene please click on the below link made available.

Louise is Australian born and has been a Greek citizen since 1991. She has deep cultural ties with the island, often writing about Zakynthian Traditions and Culture. She is also an active member of the Volunteer Group of Zakynthos, Giostra Di Zante and is a member of the women's choir "Rodambelos". Her love of the island and all it offers saw her joining the Zakynthos (Zante) Informer admin team in 2014.
Previous International:- Minister of Tourism Haris Theocharis in London today for talks.
Next Eurovision:- Greece’s entrant “Stefania’s” first rehearsal (video)