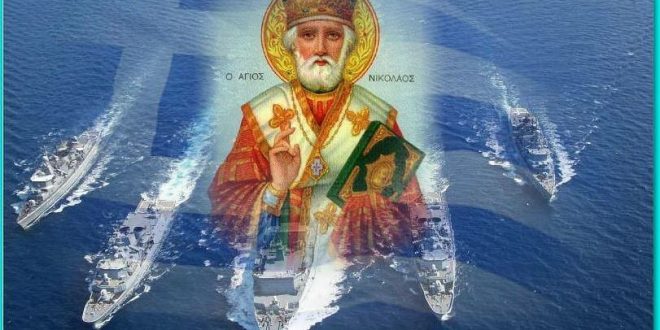 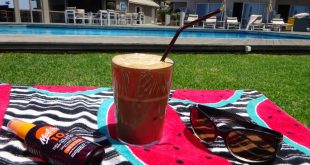 Greece:- Holy Spirit 2021: Who will have three day holiday and who will not 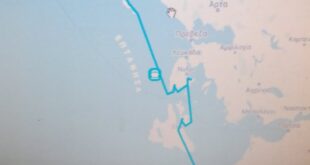 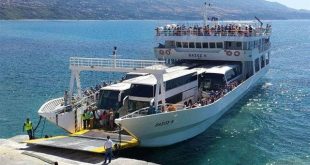 We know him here, in Zakynthos, as Agios Nikolaos. (Saint Nicholas). 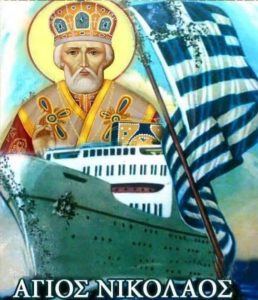 For many Zakynthians, St. Nicholas day which is celebrated on the 6th December, would probably be the start of Christmas celebrations. As for the Islander’s fishermen, it was on this day that most had their ships decorated in commemoration of their Patron Saint, as he is the protector of sailors and seamen. He is also the Patron Saint of our Navy.

They would light up their boats with decorations of blue and white lights. Even today boats are part of the Zakynthian Christmas decorations. 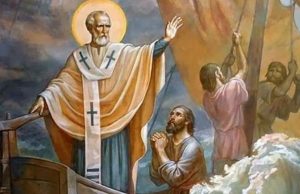 Tradition has it that Saint Nick’s clothes are soaked with brine, his beard always dripping with seawater, and his face covered with perspiration because he has been fighting storms to reach sinking ships and save men from drowning.

Those of the Greek Orthodox faith celebrate Saint Nicholas Day on December 6th. While there are many saints named Nicholas, the first and most popularly asked for intercessions is St. Nicholas of Myra, the Wonderworker and Bishop. This is the same St. Nicholas that became known to the wider world as Santa Claus, but just to let you in on a secret, you will not find any reindeer nor will you find him at the North Pole; he is not that Santa Claus. 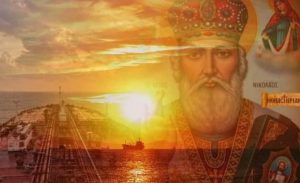 No, this Nicholas was born in the city of Patara, which would now be found in south-eastern Turkey.

St. Nicholas was born in the year 270 AD to wealthy parents. He was very involved in the Church at an early age and always observed the Wednesday and Friday fasts. His parents died as a result of a widespread infectious disease. This left the orphaned Nicholas to live with his uncle, also named Nicholas, who was the bishop of Patara. His uncle Nicholas educated him and later ordained him to the holy priesthood. After inheriting from his parents’ wealth, he gave generous gifts to those in need.

Before 313 AD, it was illegal to be Christian in the Roman Empire, even though thousands of citizens were Christian. The Emperor Diocletian, showing that he would not waiver in his faith, imprisoned St. Nicholas for his faith. He was eventually released once Constantine had gained power. By 325 AD, St. Nicholas had become Bishop Nicholas of the city of Myra.

In 325 AD, St. Constantine, the emperor of the Roman Empire, called for a gathering of the bishops of the Empire to come together and to discuss issues that the Christians were facing. In this meeting, the first heretic of the Church, Arius, was presenting his view of the theology of the Church. St. Nicholas in his outrage, listening to his faith being violated, struck down the speaker Arius. Being illegal to strike someone in the presence of the emperor, St. Nicholas was stripped of his bishop robes and thrown into prison.

St. Nicholas repented for his actions during the night, whilst still not going back on his opinions. He was later visited by Christ and the Theotokos who gave him both an omophorion (what the bishop wears over his shoulders) and the gospel. Reading the gospels during the rest of the night a miracle happened; he no longer was in his shackles and was dressed as a bishop. In the morning when Saint Constantine came to visit him, he noticed what happened and set him free.

Still not convinced that he is Santa Claus? 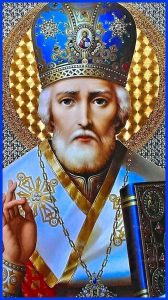 A story going back was when a man who was once wealthy, had lost most of his fortune. This man had three daughters near the age of marriage, but could not offer a dowry or (prika)  as it is known in Greek.

The Prika they need for them to be able to married good men. The man feared that his daughters would become slaves. Hearing the plight of the man he knew, St. Nicholas would turn up at his house secretly during the night and would throw a sack of gold in the window, somehow it would land in a shoe or stocking.

Mysteriously, he would do this before each daughter was to be wed. One evening of the last daughter’s attempt, the father saw who the secret donor was, it was none other than St. Nicholas. Although the mystery was discovered St. Nicholas begged the man not tell anyone of what he had been doing.

Santa Claus or not, Saint Nicholas is held strong in Christian faith, worldwide. In Zakynthos many churches bear his name. Quite often a church can be seen located within a port and the name Saint Nicholas written upon it. December the 6th a day for celebration, all those who are named after him, Nicholas, Nicole and more will have their name day and honour him in a big feast.

Xronia Polla to those who are celebrating and Happy Christmas holidays to all.

All  photos have been taken from public domain.

Louise is Australian born and has been a Greek citizen since 1991. She has deep cultural ties with the island, often writing about Zakynthian Traditions and Culture. She is also an active member of the Volunteer Group of Zakynthos, Giostra Di Zante and is a member of the women's choir "Rodambelos". Her love of the island and all it offers saw her joining the Zakynthos (Zante) Informer admin team in 2014.
Previous Greece confirms 98 more deaths, 1383 new coronavirus cases
Next Climate change: Lower Thames Crossing CO2 impact figures revealed 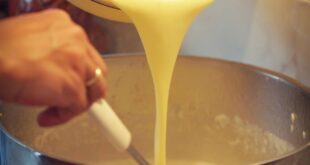