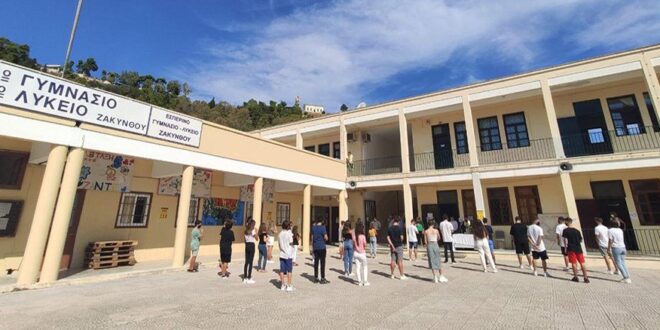 Four positive cases became known in the Primary Education of Zakynthos during its opening from today.

Specifically, after conducting a self test, two teachers were found to be positive for the coronavirus, as well as two students, who, however, have a close family relationship with the teachers.
Of course, due to the self-test, none of the four positive cases went to school, as a result quaratnining of the school department was not necessary.
In fact, in all four cases, a re-examination will be performed within 24 hours to determine if they are indeed positive cases, while for the time being they are in quarantine.

Across Greece the total of positive self tests within the education sector reached 3,000. The positive cases include teachers, students and school employees in primary and secondary education according to information from SKAI.

It is estimated that the total population of primary – secondary education amounts to 1.7 million people, while half of the population has registered on the platform self-testing.gov.gr.

It should be noted that many with a negative test result will go to schools without submitting data to the system, but with a written statement of the result.

Meanwhile we must not forget that the virus is still here and that the only way to combat it is to keep to the strict measures that our government has stated.

Masks are still required to be worn everywhere, something of late many have forgotten.

Louise is Australian born and has been a Greek citizen since 1991. She has deep cultural ties with the island, often writing about Zakynthian Traditions and Culture. She is also an active member of the Volunteer Group of Zakynthos, Giostra Di Zante and is a member of the women's choir "Rodambelos". Her love of the island and all it offers saw her joining the Zakynthos (Zante) Informer admin team in 2014.
Previous Greece:- Coronavirus update for Sunday 09 May
Next Zakynthos:- Heavy fines “handed out” on the island 10,000 euros and “suspension” for two premises