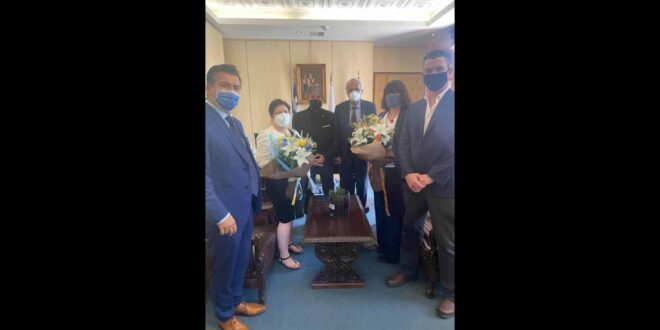 Zakynthos: Municipality of Zakynthos The Mayor was visited by the Consul of the United Kingdom

A meeting was held at the office of the Mayor of Zakynthos, which was attended by: The Mayor Mr. Nikitas Aretakis, The Consul of Greece and Cyprus Ms Clare Douglas, the Prosecutor of the Embassy Ms Rachael Weir, the HR Vice Consul of Zakynthos and Kefalonia Mr Matthew Dellap, deputy mayor for Tourism, Mr Anastasios Marinos and Deputy Mayor Nikitas Spinos.

Issues related to the tourism of our island were discussed. Information in regards to the readiness of our island in order to welcome visitors from England was exchanged.

Mrs. Douglas was particularly pleased with the preparation of our island and said that the information she will give to her ministry and medical team will be very positive.

In order to further relax the measures now available to our visitors coming from England.

Louise is Australian born and has been a Greek citizen since 1991. She has deep cultural ties with the island, often writing about Zakynthian Traditions and Culture. She is also an active member of the Volunteer Group of Zakynthos, Giostra Di Zante and is a member of the women's choir "Rodambelos". Her love of the island and all it offers saw her joining the Zakynthos (Zante) Informer admin team in 2014.
Previous Zakynthos:- volunteers again at work…… Airport road clean up with 9 volunteers
Next Zakynthos:- The British Consulate meets with our local Hospital staff for “Mental Awareness” week