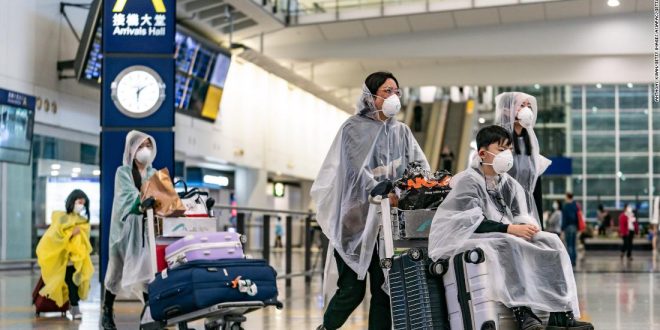 EODY announced on Tuesday afternoon, 19 new cases of coronavirus in Greece, of which 12 were travelers who arrived by flight from abroad at Athens International Airport.

Regarding the cases from the flight. The General Secretariat for Civil Protection announced that it concerns yesterday’s flight of Qatar Airlines. The flight flew from Doha to Athens International Airport “Eleftherios Venizelos”. Twelve positive samples were found. The Covid-19 disease screening test was performed on 91 patients by the General Secretariat for Civil Protection department. Nine of the positive passengers are Pakistani nationals, originally from the city of Guchrat, with a residence permit in Greece. Two Greek nationals coming from Australia and one Japanese national, a member of a Greek-Japanese family.

We remind you of the phases Greece has put into action in regards to international flights. Click on post below for more:-

According to the current protocol for those entering the country by air, all passengers were transported after the inspection and until the results of the tests in quarantine hotels came out, where the positive ones will remain for 14 days and the rest, whose test was negative, for 7 days as close high and low risk contacts, according to the instructions of the representative of the Ministry of Health for the new coronavirus, Professor Sotiris Tsiodras.

For the negative samples, tests will be repeated after 7 days.

In addition, after the above epidemiological data, flights to and from Qatar are suspended until June 15, 2020.

Louise is Australian born and has been a Greek citizen since 1991. She has deep cultural ties with the island, often writing about Zakynthian Traditions and Culture. She is also an active member of the Volunteer Group of Zakynthos, Giostra Di Zante and is a member of the women's choir "Rodambelos". Her love of the island and all it offers saw her joining the Zakynthos (Zante) Informer admin team in 2014.
Previous Cyclone Nisarga: Coronavirus patients evacuated ahead of worst storm to hit Mumbai in 70 years
Next EasyJet & Ryanair to restart flights.

28 new confirmed coronavirus cases have been recorded in Greece in the last 24 hours, …