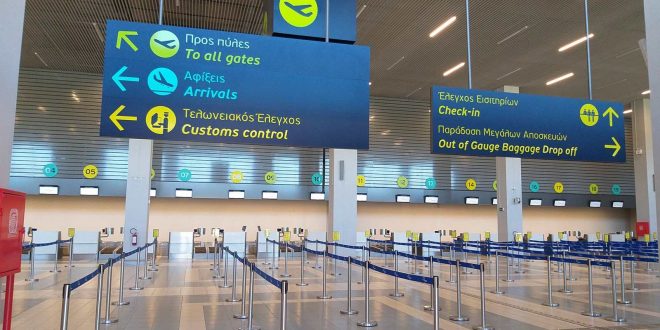 With modernized infrastructure, upgraded services and more options, the new airports in Corfu, Kefalonia and Zakynthos are ready to welcome tourists.

The modernization and upgrade program of the 14 airports is one of the largest investments implemented to date in Greece. With huge benefits for tourism and the Greek economy, the investment operates as a multi-level development vehicle, both nationally and locally. The project was completed at the beginning of the year so we can now talk about 14 modern and safe airport infrastructure, ready to welcome travelers from around the world.

In Zakynthos, the island of loggerheads that is flooded every summer by tourists, the renovation and remodeling of the terminal was implemented. Thus, the improvement of passenger flows (incoming and outgoing, especially in the summer operating months) was favored in order to minimize the congestion phenomenon during the peak period.

Also, since the renovation, the commercial spaces inside the airport have increased significantly. Check-in increased by 35% and security points by 150%. The landing-take-off-parking areas of the aircraft were reorganized and renovated, while a new fire station was built.

Thus, a new experience is formed inside the airport which focuses on the passenger, taking all those measures which, as a safety net, provide the feeling of security and calm.

Louise is Australian born and has been a Greek citizen since 1991. She has deep cultural ties with the island, often writing about Zakynthian Traditions and Culture. She is also an active member of the Volunteer Group of Zakynthos, Giostra Di Zante and is a member of the women's choir "Rodambelos". Her love of the island and all it offers saw her joining the Zakynthos (Zante) Informer admin team in 2014.
Previous Black day today (30/3) – 4340 new cases – 72 deaths and 741 intubated
Next Zakynthos:- Agios Leontas.. Rapid Tests available Friday Morning.