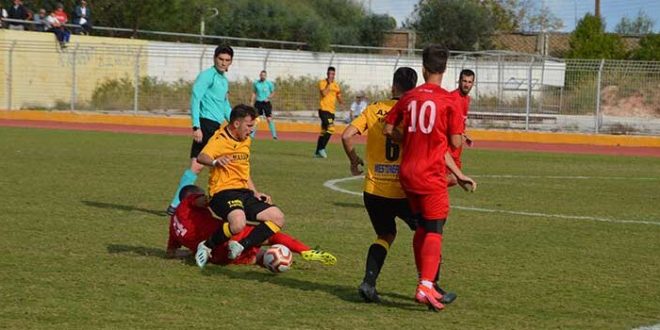 Football Season is well underway AO Tsilivi, improved performance but no goal The match with Achaiki on Sunday 25th October left a bittersweet taste for the team and the fan of our very own Tsilivi football team. Although the team showed an improvement in their performance they were unable to score a goal with the final score being 0 – 0. The game had a rhythm of intensity and passion, with the reds trying to score but there was something missing in the attack. The opportunities the Planos team created were few but what the team did have was the passion and stubbornness to try to get the three points. They played better in the first half with both Marouda and Tzanari having 2-3 opportunities. In the second half the opposition had a few good moments with pressure from Pyrris at 74 minutes and Grammatikoupoulos a couple of minutes later. The reds goalkeeper Diamantis Hararktinos was the hero of the moment making three great saves during the game. The final score a tie of 0-0 left the team from Achaiki more satisfied than Tsilivi, whose coach Patrick Engema stating that the team played well and a defeat would have been a disaster for the team. The Planos teams next match is on Sunday 1/11, lets all show are support and come along to encourage the Reds

For the full report and photos in Greek click on source link:-https://ioniansports.gr

Louise is Australian born and has been a Greek citizen since 1991. She has deep cultural ties with the island, often writing about Zakynthian Traditions and Culture. She is also an active member of the Volunteer Group of Zakynthos, Giostra Di Zante and is a member of the women's choir "Rodambelos". Her love of the island and all it offers saw her joining the Zakynthos (Zante) Informer admin team in 2014.
Previous Rhodes: Two teenager tourists killed, third seriously injured during parasailing
Next Greece:- Coronavirus daily report for 28/10