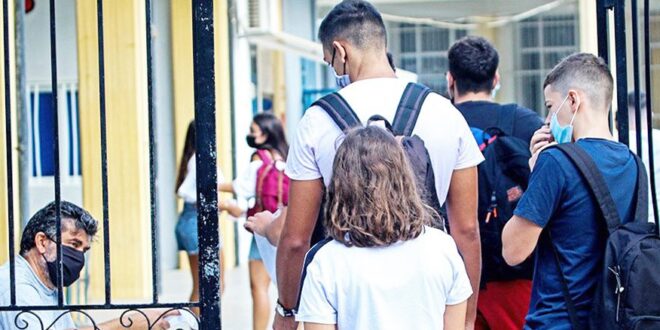 Greece:- Schools: How they open on Monday – What Ms Makri said about self test and tutoring

Louise Inzk 7th May 2021 Greece, News Comments Off on Greece:- Schools: How they open on Monday – What Ms Makri said about self test and tutoring

Opening of schools: Speaking to SKAI, Ms. Makri referred, among other things, to the opening of primary schools, gymnasiums and tutoring centers and foreign language schools.

Normally, all school levels start on Monday with two self tests per week, as the Undersecretary confirmed. At the same time, the vaccination of teachers is progressing.

Ms. Makri stressed that the Ministry of Education is in consultation with the Ministry of Labor to open the AMKA and to provide self test and the teachers of the private tuition centers. There is a case, in fact, to open today.

Regarding teacher vaccinations, she said that teachers and students over the age of 16 in special education schools, as well as support staff and administrators, were vaccinated as a matter of priority.

She also clarified that if a teacher refuses to take the diagnostic test, “there is an explicit provision for disciplinary penalties (from written reprimand to salary reduction or permanent dismissal). So far no such thing has been reported. This provision applies to everyone in the public and private sectors who are required to take the test. ”

The sanctions for students are absences or expulsions, she added.

Regarding the mandatory vaccination, the Undersecretary estimated that such a measure would not be needed.

Louise is Australian born and has been a Greek citizen since 1991. She has deep cultural ties with the island, often writing about Zakynthian Traditions and Culture. She is also an active member of the Volunteer Group of Zakynthos, Giostra Di Zante and is a member of the women's choir "Rodambelos". Her love of the island and all it offers saw her joining the Zakynthos (Zante) Informer admin team in 2014.
Previous Zakynthos:- Emergency chemist, phamarcy, drug store 24hrs open for the month of May
Next International:- Greece not included in UK’s “Green List”