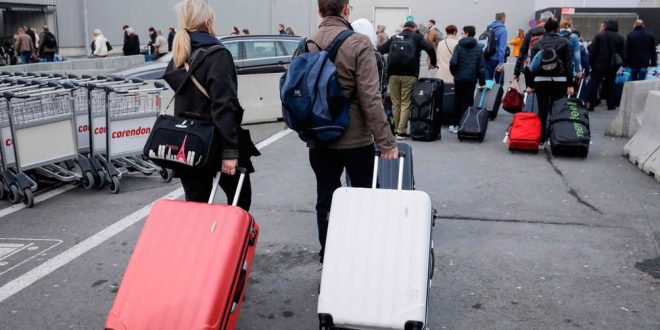 Zakynthos:- The British covid cases “imposed” the tightening of the measures.

Louise Inzk 31st August 2020 Local, News Comments Off on Zakynthos:- The British covid cases “imposed” the tightening of the measures.

The statements and claims of British tourists, who on their return to their country were positive with coronavirus, and that they were picked it up here in Zakynthos, was one of the main reasons that led the authorities to take the decision to tighten measures on the island, according to information from Zante.report.

The beginning was made with the 11 British teenagers from the group of 30, who tested positive for the virus upon their arrival in Plymouth and who had spent their holidays in Zakynthos. The statements of both them and the director of Health of the Municipality of the city, concerned our  Civil Protection Authority.

When 7 more were added who were positive on arrival in Wales, also after a holiday in Zakynthos, who were not in the same group of tourists but from different parties, as well as the reports and posts that followed, both for the same incidents as well as the large number of Britons quarantined because they traveled or came into contact with confirmed bodies, were the ones that led to the tightening of measures.

It is worth noting that all the above cases were recorded and reported in Britain from 24 to 26 August, ie two days before Nikos Hardalias announced the new measures for Zakynthos.

Zakynthos Informer would like to mention that these strict measures are taken to protect not only our visitors but residents who have done their upmost to keep the covid count low during a pandemic.

Information has been given to us that some visitors do not want to follow these measures. To these people we would like to remind you that not only are you putting yourself at risk but those around you. There are also penalties if you are caught, starting from 150 Euro fine.  Masks must be worn at all times, social distancing and personal hygiene should be first priority during your stay.

Source and full story in Greek:-https://zantetimes.gr

Louise is Australian born and has been a Greek citizen since 1991. She has deep cultural ties with the island, often writing about Zakynthian Traditions and Culture. She is also an active member of the Volunteer Group of Zakynthos, Giostra Di Zante and is a member of the women's choir "Rodambelos". Her love of the island and all it offers saw her joining the Zakynthos (Zante) Informer admin team in 2014.
Previous Speed boat kills British national on the island of Corfu
Next Zakynthos:- Concern over covid cases.